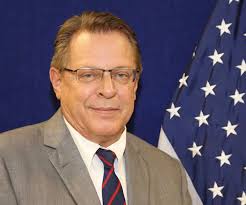 11 April 2018, Sweetcrude, Port Harcourt — The United States of America, on Tuesday, gave Nigeria a condition for foreign investors to invest in the country.

The US Consul General, Mr. John Bray, said that Nigeria must conduct a free, fair, transparent and non-violent election in 2019.

Bray while speaking at an event organised for 121 emerging entrepreneurs in Nigeria, held at the Institute of Petroleum Studies, University of Port Harcourt, stated that one of the United States Mission Nigeria’s primary goals is to support Nigeria’s economic development.

He also said the conference was organised to equip the entrepreneurs with the requisite skills and entrepreneurial know-how to enhance their success in the business world.

According to him, “We are going into a very serious political period in Nigeria. One of the most terrible reputations for election violence is right here in Port Harcourt.

“When I was speaking with Governor Wike last night. I said if you want investors to come, let’s have a free, fair, transparent and non-violent election in Port Harcourt.”

The Consul General also stated that the United States supports entrepreneurial development in developing countries through a variety of programmes and projects funded by the Department of State, Agriculture, and Commerce as well as through USAID.

“The US Department of State supports entrepreneurs all over the world through training and mentoring, while also working with governments to create enabling environment and entrepreneurial cultures.

“There is growing evidence that entrepreneurs the world over are the drivers of job growth.

“The United States government is firmly convinced that in addition to creating jobs and expanding economic opportunities, entrepreneurship contributes to political stability and a vibrant civil society,” the Consul General said.