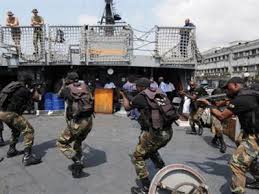 Lagos — The United States Africa Command and the Nigerian Navy representatives of maritime forces from the Gulf of Guinea, Europe, North and South America, as well as regional and international organizations, yesterday commenced the nineth edition of Obangame Express.

Obangame Express is an annual multinational maritime exercise designed to improve cooperation amongst participating nations in order to increase maritime safety and security in the Gulf of Guinea.

The training school was built by the Nigerian Navy and equipped by the United States Navy.

In his remarks at the ceremony, United States Consul General, John Bray noted that Obangame Exercise has grown in leaps and bounds, both in complexity and in accomplishment and as such lauding it cannot be overemphasized.

He said “We note the efforts by regional navies to work together in the spirit of the Yaoundé Code of Conduct which is designed to improve regional cooperation, maritime domain awareness, information-sharing practices, and tactical interdiction expertise to enhance the collective capabilities of Gulf of Guinea and West African nations to counter sea-based illicit activity.

“The Maritime Domain Awareness Training School in Apapa is one of the most evident examples of our enduring partnership. This school will be a regional center of excellence in the area of maritime domain awareness where neighbouring countries will be trained,” the CG added.

In her remarks, Director, Directorate of Intelligence, US Africa Command, Rear Admiral Heidi Berg, lauded the commitment of the 33 nations scheduled to participate in this year’s exercise.

According to her, illicit maritime activities such as illegal fishing, trafficking of weapons, narcotics and people, as well as the ongoing threat of piracy, undermine the rule of law, food security, and economic development in the region.

“This exercise is a clear demonstration of the United States’ dedication to combat these illicit activities and help our partners in the Gulf of Guinea to provide security for their resources, their economy, and their people.

Obangame Express 2019 will make the region a safe place for maritime commerce and ultimately help increase the prosperity of the region,” Berg said.

Obangame Express is part of a comprehensive strategy by US Africa Command and US Naval Forces Europe-Africa to provide collaborative opportunities among African forces and international partners that address maritime security concerns.