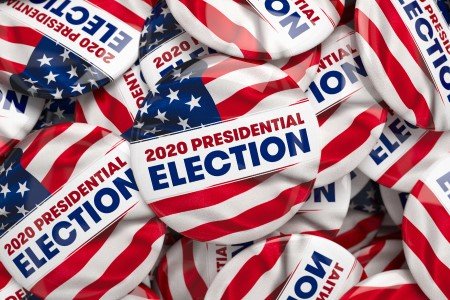 London — It would be nice to think that with the US presidential elections only a few days away, and Trump trailing badly in the opinion polls, that the end of nearly four years of right-wing populism a la Donald Trump is in sight.
This is a false hope on so many levels.

For a start, he may still win. And a massive question mark hangs over the issue of whether, or not, Donald Trump will accept defeat at the polls. “If I lose, the election is fraudulent,” Trump asserts with unbelievable arrogance and disregard for basic democratic values.

If the president loses and refuses to concede then America runs the risk that Trumptonian arrogance and obstinacy combines with divisions in American society to bring gun owners out on the streets. And the longer Trump fights a pro-Biden result the greater danger.

The convention since World War Two has been for ex-American presidents to slip quietly out of the political limelight to expand on their footnote in history by writing their memoirs, building a presidential library, creating a charity or two, joining the lecture circuit and taking on a behind-the-scenes elder statesman role. To do otherwise threatens the establishment of an alternative court which would undermine the sitting president.

Trump is not the type to embrace a quiet retirement. He will attack, lambast, slam and condemn with lies and conspiracy theories any occupant of the Oval Office other than himself because he cannot conceive of any other person being able to fill the position.

Trump has, however, managed to fill other positions—mainly in the judiciary. One third of the Supreme Court Justices—Neil Gorsuch, Brett Kavanagh and Amy Comey Barrett—are Trump appointees and give the highest court in the land a 5-3 conservative bent. On top of that Trump has filled 216 – over a quarter—of the 870 federal judgeships with conservative jurists. Many of his core conservative beliefs on issues such as abortion, gun ownership and immigration will be ruled on by conservative-minded courts for decades to come.

On the foreign policy front, Trump’s bully-boy tactics have reduced America from beacon of hope to just another grasping superpower. There have been successes. He has persuaded NATO allies to increase defence spending, secured recognition of Israel by Arab states and made clear to Beijing that the US-Chinese relationship is now decidedly adversarial. But the tactics he employed to achieve those ends has alienated allies and left a bad odour in almost every world capital. His only foreign supporters are those who benefit from the same dubious political methodology.

Lies—or what his adviser Kelly-Anne Conway dubbed “alternative facts”– have been at the core of the Trump presidency. He will say or do anything that advances the cause of Donald Trump. “Truth,” it is said, “is the first casualty of war,” and Donald Trump was at war with anyone who disagreed with him long before he entered the White House.

His handling of the Coronavirus pandemic is the latest and possibly best example of lies in the pursuit of power. Trump’s handling of the economy was his best chance of re-election. The pandemic threatened that. So, Trump opted for wealth over health. Other national leaders have adopted similar positions, but Trump has gone to the extreme with false claims about Chinese conspiracies, assertions that coronavirus was now worse than flu, that flu kills more people than covid-19, refusal to follow medical advice and wear a mask, and—as the number of new daily confirmed cases tops 86,000—assert that the pandemic is an invention of the anti-Trump media.

But Trump’s most damaging, and possibly the most long-lasting legacy is his divide and conquer politics. Past presidents have sought to curtail the damage of the toxic partisanship that has plagued American politics since the 1980s. Trump has never attempted to represent those who did not vote for him in 2016. He will support any person, belief or organisation that swears loyalty to Donald Trump without any regard to the US constitution and the rule of law and attack, insult and belittle anyone who doesn’t. This has allowed the racists, the white supremacists, the conspiracy theorists and the second amendmenters to crawl out of the woodwork and it will be difficult to push them back in.

World Review
The Islamic world has a new hate figure. It is France and President Emmanuel Macron who is caught between opposing demands of foreign and domestic politics. The latest problems started with the beheading of French teacher Samuel Paty who infuriated Muslims when he displayed cartoons of the prophet Mohammed. Paty’s death has been followed by two fatal stabbing in the Basilica of Notre Dame in Nice, an incident involving a handgun near Avignon and an attack on the guard outside the French consulate in Jeddah. The Islamic world is angry at Macron’s response to the Paty murder which was to push French Muslims to accept the 105-year-old French doctrine of secularism, and the application of economic thumb screws to achieve that end. Led by Turkey’s Recep Tayip Erdogan, Islamic countries have called for boycotts of French goods, staged demonstrations and even threatened to break diplomatic relations. In Bangladesh 40,000 anti-French demonstrators took to the streets. In Qatar a planned French Culture Week was cancelled at the last minute. Other countries that have protested include Jordan, Kuwait, Pakistan, Jordan, the UAE and Saudi Arabia. Ex-Malaysian Prime Minister Mahathir bin Mohammad tweeted: “Muslims have a right to be angry and to kill millions of French people for the massacres of the past.” But if Macron does not take a tough stand against Islamic tendencies and the perceived threat it poses to French customs and laws, he risks losing voters to Marine Le Pen’s far-right xenophobic national rally. After the murder of Paty, Ms le Pen called for “wartime legislation” to combat “an organised and already installed force.” The French presidential elections are 18 months in the future, but the main candidates are putting down their markers for what will be a major election issue.

Across the English Channel, the British Labour Party is having its own race/religion-related problems. One of the main reasons it lost the general election last December was the party’s perceived anti-Semitism and Labour Leader Jeremy Corbyn’s alleged support for that position. A report published on Thursday by the Equality and Human Rights Commission (which was created by a Labour government in 2007) slammed Corbyn’s office for “politically interfering” with complaints about Labour’s anti-Semitism. Corbyn responded with a statement claiming that the accusation of anti-Semitism was “overstated.” Keir Starmer, Labour’s new Leader, immediately apologised, promised to implement all of the commission’s recommendations and suspended his predecessor from the party pending a full investigation. This is unprecedented. I do not know of any other occasion when the past leader of a major British political party has been suspended by their party. The question thus arises: How will this affect other Labour Party policies? Corbyn was the standard bearer of Labour’s far left. Support for Palestinians and a belief in the ages old trope that world Jewry directs global political affairs through its control of the media and financial institutions are two major beliefs of the far left (and the far right). Keir Starmer has been careful not to come down too hard on either the left or right of the political divide. His crystal clear position on anti-Semitism and suspension of Corbyn has moved him firmly towards the right of the Labour Party and could lead to a civil war within Labour.

There is no easy solution to the successive coronavirus tsunamis that are hitting almost every part of the world but seem at the moment to be particularly hard on Europe, South Asia, Iran, the United States and South America. However, after nine months of life with Covid-19 certain trends are appearing. Those countries that cracked down hard on the virus from the outset are now faring better than those that did not. Those that opted for wealth in the difficult health-wealth equation are finding that they may end up with neither. And finally, those who have largely ignored health issues in favour of political expediency are suffering the most.

Turkey and Russia are not natural allies. For centuries the Ottomans, and later the Turks, have blocked the Russian dream of access to the Mediterranean, and the Turks have resented Russian interference in Central Asia and the Balkans. The disputed enclave of Nagorno-Karabakh has become one of the contemporary Turkish-Russian flashpoints. Another one is northern Syria. Turkey has pledged “total support” to Azerbaijan’s claim for Nagorno-Karabakh and supplied drone technology and possibly some troops, Russia is a traditional backer of Armenia, but has so far been reluctant to become involved in the latest Armenia-Azerbaijan clash. But that does not mean that it is ignoring Turkey. In Northern Syria, Recep Tayyip Erdogan has exploited the vacuum created by the civil war to occupy 8,835 square kilometres of Syria. The occupation is ostensibly for the purpose of preventing Syrian Kurds from using Northern Syria as a base for attacks on Turkey, but there is no indication that Turkey will peacefully withdraw when the Syrian Civil War finally ends. Russia has been backing Syria’s President Assad since September 2015 with troops and planes. This week it attacked the Turkish-held areas and 78 people died. This could be interpreted as a message from Moscow to Ankara that if Turkey does not back off in Nagorno-Karabakh it faces serious problems in Syria. Of course, Turkey could send a similar message to Putin by increasing its support for Azerbaijan.

In a soldier’s world information is king. There is little point in deploying a state of the art missile system if you don’t know where to aim it. That is why a US-Indian defence deal signed this past Tuesday is so important. It gives India access to the intelligence gathered by America’s 47 reconnaissance satellites orbiting Earth. America provides this information through “The Basic Exchange and Cooperation on Geospatial Cooperation (aka BECA) to only a handful of other countries. The deal underscores just how important India has become in Washington’s geopolitical thinking and how concerned both countries are about the Chinese threat. Pakistan has been virtually written off as America’s regional ally. It is increasingly regarded by Washington as politically unstable and redundant as the US winds down its presence in Afghanistan. On top of that, there are concerns about Islamabad’s long-term close relations with China and the fact that Pakistan is heavily in debt to the Chinese. China is the Trump Administration’s public enemy number one and Secretary of State Mike Pompeo is busy trying to establish an anti-Chinese Asian NATO of which India would be a key component along with the US, Japan and Australia.

Oil-rich Nigeria is Africa’s wealthiest country. It is also the continent’s most populous with 196 million people. Nigeria is also one of most corrupt countries. It is currently ranked 144th out of 180 countries in Transparency International’s Corruption Index. The Nigerian government has reported that the most corrupt organisation within this corrupt country is the 372,000-strong police force. It is regarded as working hand in glove with criminal organisations, extorts money from innocent citizens and regularly conducts extra-judicial killings. Part of the problem can be traced back to a Nigerian policeman’s pay. The average Nigerian monthly salary is $890. The average policeman’s salary is $40 per month. The only hope most policemen have of paying the bills is extortion and back handers. The problem has been compounded by the Black Lives Matter campaign and the coronavirus pandemic. Demonstrations in America and Europe have stirred Nigerians to take to the streets in their own version of Black Lives Matter. At the same time, government restrictions related to covid-19 have increased opportunities for extortion. The result has been a series of anti-police brutality riots in Lagos which has brought Africa’s most populous city to a standstill.