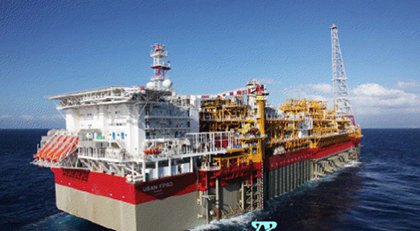 The USAN FPSO arrived on site on the 31st July, 2011 after 3 months of being towed from Ulsan, South Korea. The FPSO is currently undergoing Customs clearance. , Mooring will start immediately after preliminary check-up procedures are concluded.

Awarded Best Project at the 2011 Nigerian Oil and Gas (NOG) conference, the USAN Project is a showpiece of Nigerian Content development with more than 11 million man-hours of engineering, fabrication, assembly and offshore integration of equipment being performed in Nigeria.

Oil production flowlines are already installed as well as water injection lines. The first two oil production manifolds are installed and the next three will be installed by end of August. First oil from the USAN field is expected Q1-2012.