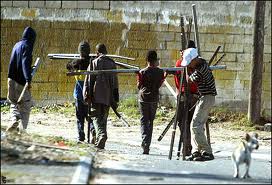 PUNCH Metro learnt that the vandals had entered the estate through the creek and scaled the fence into the victim’s house on Michael Ajao Street.

They were said to have turned off his generator to trick him out.

Our correspondent was told that Olufemi, who worked in a brewery, however, sent his son outside to check what went wrong and restart the generator.

The vandals were said to have emerged from their hideout, forced the boy back into the house and abducted his father.

Our correspondent gathered that the victim had only packed into the estate four months ago, after completing the building.

A resident, who spoke on condition of anonymity, said the vandals looted the family’s valuables before disappearing with Olufemi into the creek.

He said, “The incident happened last Friday night. The vandals jumped over the fence into the man’s house and switched off his generator.

“The man, who was surprised that the generator went off, asked his son to go check what happened. The boy went out, turned on the generator and was about going inside when the vandals held him. They asked him to lead them inside.

“When they got in, they ransacked the building and took jewellery, mobile phones, laptops, an iPad, and money. They took all the valuables they could lay their hands on. After they finished, they disappeared with the man.”

A source said the vandals had been communicating with Olufemi’s wife, adding that they had demanded N10m as ransom.

It was gathered that the case was reported at the Ibafo Police Division.

PUNCH Metro had reported that the vandals shot dead an Assistant Superintendent of Police in the locality about a month ago.

A resident, who called for government’s help, said security took a turn for the worse when the Nigerian National Petroleum Corporation stopped pumping fuel through the pipelines in the community.

He explained that people had been leaving the estate in droves, saying residents could no longer sleep with their eyes closed.

He said, “They have always been in the creek, but they never gave us any problem. However, when there were no more pipelines to burst, they unleashed terror on us.

“The first time they came, they said, ‘Since you are the ones that asked them to stop pumping fuel, you will now be providing the food we will eat.’ We want the government to send them out of the creek so we can have peace of mind.”

A landlord, who spoke on condition of anonymity, said efforts by residents to increase security in the area had been abortive.

He said, “We arranged with some military personnel to patrol our estate, but it didn’t work. The route through which the vandals usually enter into the estate was illuminated. It also didn’t work.

“What makes us prone to the attacks is that the estate is surrounded by water.”

He said, “We are on it. We suspect they are militants. There was a meeting today involving the government and stakeholders on how to put an end to their criminal acts in Ogun State, including the attacks on our communities. We will rescue the victim.”