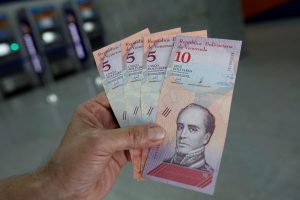 A man shows the new five and ten Bolivar Soberano (Sovereign Bolivar) bills, after he withdrew them from an automated teller machine (ATM) at a Mercantil bank branch in Caracas, Venezuela August 20, 2018. REUTERS/Carlos Garcia Rawlins

21 August 2018, Caracas/Valencia, Venezuela — Venezuela on Monday slashed five zeros from prices as part of a broad economic plan that President Nicolas Maduro says will tame hyperinflation but critics call another raft of failed socialist policies that will push the chaotic country deeper into crisis.

Streets were quiet and shops were closed due to a national holiday that Maduro decreed for the first day of the new pricing plan for the stricken economy, which the International Monetary Fund has estimated will have 1 million percent inflation by year end.

The price change comes with a 3,000 percent minimum wage hike, tax increases meant to shore up state coffers and a plan to peg salaries, prices and the country’s exchange rate to the petro, an elusive state-backed cryptocurrency.

Economists say the plan, which was announced last Friday, is likely to escalate the crisis facing the once-booming nation that is now suffering from Soviet-style product shortages and a mass exodus of citizens fleeing for other South American countries.

Venezuelans were skeptical the plan will turn the economy around.

“I can’t find a cash machine because all the banks are closed today,” said Jose Moreno, 71, a retired engineer in the central city of Valencia, complaining of chronically dysfunctional public services.

After a decade-long oil bonanza that spawned a consumption boom in the OPEC member, many citizens are now reduced to scouring through garbage to find food as monthly salaries currently amount to a few U.S. dollars a month.

The new measures have worried shopkeepers already struggling to stay afloat due to hyperinflation, government-set prices for goods ranging from flour to diapers, and strict currency controls that crimp imports.