16 June 2018, Beijing/Singapore/New Delhi — China’s imports of Venezuelan crude oil could sink to their lowest in nearly eight years in July as the OPEC producer struggles with shrinking output and mounting logistics issues, according to people familiar with the matter and shipping data.

State-controlled PetroChina expects June loadings from Venezuela, mainly the Merey grade, to be half the normal rates, according to two Beijing-based oil officials briefed on the matter. Venezuela’s state firm PDVSA has promised the lost volume would be topped up in July loadings for arrival in August-September, they said.

The plunge in supplies to Venezuela’s most important customer, creditor and political ally is the latest indicator of tough times for the cash-strapped country with the world’s largest oil reserves. Crude output fell to the lowest annual average in over three decades between January and April, while claims on assets by creditors have cut off PDVSA’s access to export terminals.

The slide cuts both ways. China’s growing thirst for oil amid still-sturdy economic growth is increasing its reliance on imports, while Venezuela’s trouble exporting as its infrastructure crumbles means it’s missing out on crude oil prices that have risen to their highest in years.

“One of the best things about Venezuelan oil was its stable volumes for all these years and competitive prices,” said one senior oil industry official with direct knowledge of the supply situation. “But now they seem in very bad shape, not having the money to upgrade port facilities, no money even to remove the high water content in crude oil.”

The officials spoke on condition of anonymity because they weren’t authorised to discuss the matter with media.

Only one supertanker, the “New Pearl” carrying 2 million barrels of Venezuelan crude, is set to arrive in China’s eastern province of Shandong in July, down from this year’s monthly peak of 11 million barrels in March, according to Thomson Reuters Eikon trade flows data.

That would be the lowest monthly import volume since late 2010, according to Chinese customs data.

PetroChina said it does not comment on market speculation. PDVSA did not immediately respond to Reuters’ requests for comment.

‘BIGGEST CASUALTY’
Disruptions in Venezuelan crude supplies to China started in April, and from mid-May through early June PDVSA did not load any crude for PetroChina, said the senior oil official. The Chinese firm lifted an average of around 20 million tonnes a year – or 400,000 barrels a day – in 2016 and 2017 of Venezuelan crude oil under a government-to-government loan-for-oil programme.

“Venezuela remains the biggest and most visible casualty of the (oil) market share war,” analysts at RBC Capital Markets led by Helima Croft said in a note on Thursday.

“We see almost no prospect of a turnaround in the Venezuelan story this year, at least barring a change in government, and even if the country comes under new management, it will still take a considerable amount of time and international assistance to right the ship and restore production.”

PDVSA has halted operations at units that convert extra-heavy oil into exportable crude. Early this month it asked customers to transfer oil at sea to clear a backlog of tankers waiting to load at its ports.

The Venezuelan firm has notified PetroChina of the new ship-to-ship requirement and agreed also to bear the additional cost, according to another industry executive with knowledge of the matter.

‘CHANGE DIET’
One trader with an independent Chinese refiner said he was still receiving offers of Venezuelan oil for August delivery at stable prices compared with a month ago, but added that the supply outlook is murky. “There isn’t a lot of cheap heavy crude (available) so some Chinese refineries might have to change diet a bit,” he said.

Sengyick Tee, a Beijing-based consultant at SIA Energy, said Chinese independents have increased imports of other heavy crude grades such as Castilla from Colombia and fuel oil as a replacement.

Venezuela was the eighth-largest crude supplier to China last year, with 435,400 barrels per day (bpd), behind Brazil, according to China customs data. 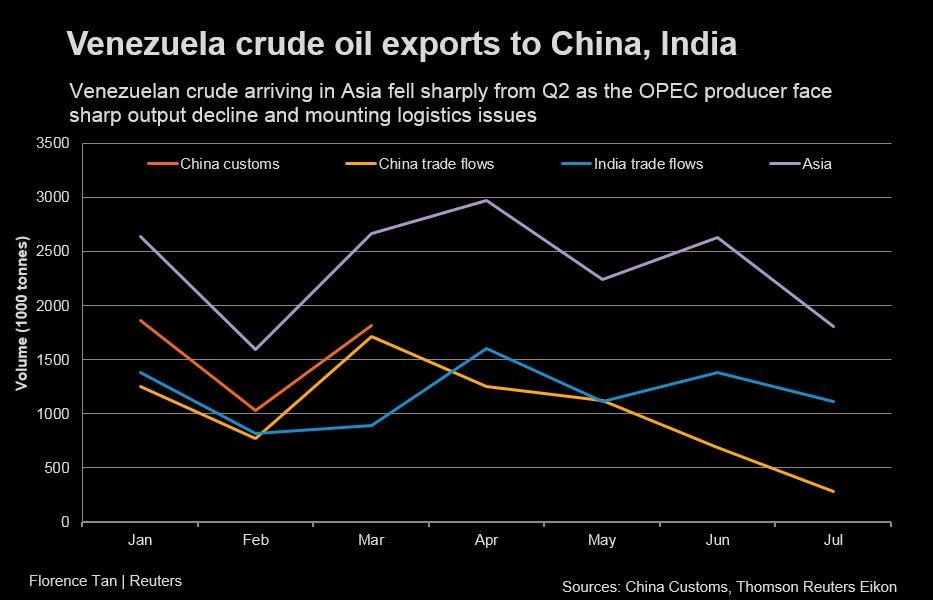 But it already dropped to the ninth position in the first quarter of this year with an average volume of 381,300 bpd as China ramped up imports from Iraq, Kuwait and Brazil.

Venezuelan crude exports to India have also dropped 20 percent in the first five months to 323,600 bpd, according to data from shipping and industry sources.