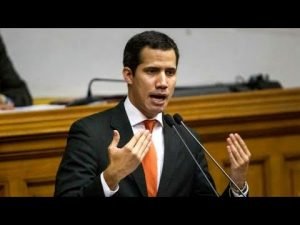 Caracas — Venezuela’s National Assembly, led by opposition leader Juan Guaido, on Tuesday authorized an interest payment on an overdue bond, in an apparent bid to keep the country’s crown jewel overseas asset out of creditor hands.

The $71 million interest payment will be paid on state oil company PDVSA’s 2020 bond, which is backed by shares in its subsidiary, U.S. refiner Citgo Petroleum. Failure to make the payment could prompt creditors to attempt to seize up to half of the shares in Citgo.

Venezuelan President Nicolas Maduro’s government had remained current on the 2020 bond in order to avoid losing Citgo, even as it has fallen behind on more than $9 billion in payments on other debt issued by the government and by PDVSA.

But the latest interest payment, due on April 27, remains outstanding. PDVSA has a 30-day grace period in which to make the payment before creditors can attempt to seize the shares.

The United States slapped sanctions on PDVSA in January in a bid to pressure Maduro, a socialist labeled a dictator by the Trump administration and many other countries in the region, to step down. That would have complicated any effort by a Maduro-linked entity to make the payment.

Allies of Guaido, who in January invoked the country’s constitution to assume an interim presidency, arguing Maduro’s 2018 re-election was illegitimate, have said they would seek an authorization from the U.S. Treasury Department to make the payment.

Guaido’s team has not specified which funds it will use to make the payment. Guaido has appointed a board of directors for Citgo, which has taken control of the company.

Neither PDVSA nor Venezuela’s oil ministry responded to requests for comment on the payment authorization. Maduro has accused the opposition of attempting to “steal” Citgo.

Holders of the 2020 bond are not the only threats to Venezuela’s continued ownership of Citgo. Canadian miner Crystallex is attempting to seize shares in the company as compensation for an unpaid arbitration award after Venezuela expropriated its gold mining project.

Venezuela also pledged part of Citgo to Russia as collateral for a $1.5 billion loan.