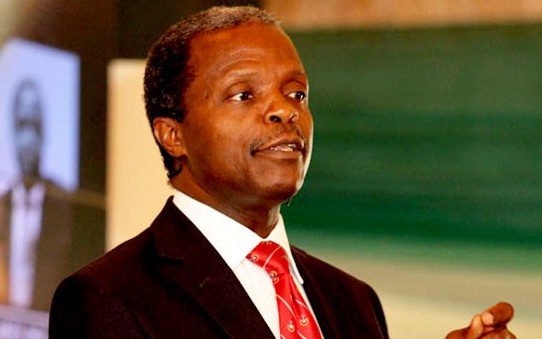 Osinbajo, in a statement by his spokesman, Mr. Laolu Akande, said the money was proceeds from oil lifted in a strategic alliance contract with the NNPC.

The opposition Peoples’ Democratic Party (PDP) had last Wednesday challenged the vice president to name the three persons he claimed to have stolen the money.

Osinbajo noted that Diezani, Omokore and Aluko made away with the money and that royalties and taxes were also not paid, adding that none of them had come out to make any denial.

Osinbajo had been accused of lying against the ex-president or his government by citing the looting of the nation’s treasury, while he was speaking recently at ‘The Platform’.

Osinbajo said, “Grand corruption remains the most enduring threat to our economy. Three billion US dollars was stolen in what was called the strategic alliance contacts in 2013, three Nigerians were responsible, today three billion dollars is NI trillion and our budget is N7 trillion.”

In a statement issued in Abuja, Akande said the looting under former President Goodluck Jonathan has been a subject of criminal investigation and trials even in the UK.

He further listed “facts on grand corruption” perpetrated under Jonathan’s government, which he said were a tip of the iceberg.

According to him, the “facts” are “the release of the sum of $289m on February 25, 2015, illegal disbursement of N60 billion … most of which ended up in the hands of senior members of the Peoples Democratic Party (PDP – then ruling party), $3 billion stolen in the so-called NNPC strategic alliance contracts, N40 billion from CBN released for the PDP presidential primary, among others.

He also said the amount released from CBN in cash on a single day, “ie US$289 million ( N88.1 billion) is enough to fund 244,000 N-Power graduates for a year, or pay for 1.2 billion school meals or complete half of Lagos -Ibadan or half of Abuja -Kaduna -Kano roads.”

He added that, “We all know about the $2.1 billion arms equipment scandal that was investigated, it is being used in the case against the former NSA, this also happened under the previous administration.

“We have released a number of names of people who have been found with questionable funds, allegedly looted from the public till, and some of them, in some instances, have actually refunded money that they couldn’t explain where it came from.

“We have tons and tons of evidence of how under the previous administration, grand corruption was the order of the day,” the vice president added.