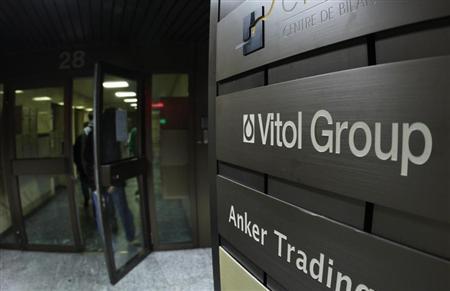 A sign is pictured in front of Vitol Group trading commodities company building in Geneva.

Prosecutors say at least $2.85 million in bribes were involved, but have called their discoveries so far the “tip of the iceberg.”

Petrobras said in an emailed response to Reuters that it had suspended oil trades with Vitol, along with other massive trading firms Trafigura and Glencore, which also face accusations in the same probe.

Petrobras said it demanded an explanation from the firms about what actions they are taking to address the allegations lodged by Brazilian investigators.

Last week, Vitol and Glencore told Reuters they would work with investigators, while Trafigura said it was reviewing the allegations. Trafigura and Vitol said they have zero-tolerance policies for bribery and corruption, while Glencore said it takes ethics and compliance seriously.

Those charged on Thursday include former Petrobras employees and middlemen who prosecutors allege worked directly with top executives at Vitol.

In Thursday’s charging document, prosecutors said one of Vitol’s top executives, Mike Loya, head of the firm in the United States, and Antonio Maarraoui, the company’s head for Latin American and the Caribbean, had full knowledge of the scheme.

Neither Loya nor Maarraoui was charged on Thursday. Neither of the executives has replied to repeated requests for comment.

Prosecutors told Reuters they will aggressively use the same tactics in this case: charge smaller figures involved and work to reach plea deals with them, seeking testimony against the executives at the foreign firms they allege are involved.

The stakes are high for the trading firms.

Brazilian prosecutors allege some of the crimes were carried out by Petrobras traders based in Houston and that some illicit funds moved through the U.S. and European banking systems, raising the chance that jurisdiction for investigating the case would widen. Brazilian and U.S. prosecutors have worked closely in the past on Car Wash cases.

Loans to the companies could dry up if the corruption allegations stick, according to a senior banking executive at a major global bank who declined to be identified. Since the 2008 financial crisis, big banks have faced increased scrutiny from regulators to crack down on money laundering and other financial crimes.

The probe has already frozen their current business in Brazil, an increasingly important global oil producer, but not yet a major source of revenue for the firms. Trafigura said its turnover in Brazil last year was $300 million, a fraction of its overall $136 billion in 2017. Glencore and Vitol would not provide revenue details, but said Brazil was a minor market.

Vitol has a deal pending to purchase a stake in Petrobras’ prized Nigerian oilfields. In its statement to Reuters, Petrobras said there were no indications of wrongdoing in that deal, but it would be up to Brazilian regulators to make the final determination.

The new developments are also a signal that Brazil’s landmark “Car Wash” probe is far from over.

Launched to investigate contracting graft at Petrobras, the probe and resulting trials have toppled scores of powerful business and political figures, including construction industry moguls and former presidents of Brazil and Peru.

Foreign oil companies are now in the cross hairs, said prosecutor Athayde Ribeiro Costa, who is heading the latest phase of the probe.

Costa told Reuters that any firm that has done business with Petrobras since 2003 would come under intense scrutiny. He added that other major firms have approached Brazilian prosecutors to sound them out about leniency deals. He declined to name the companies.