We have severed ties with NLNG, says Finima community 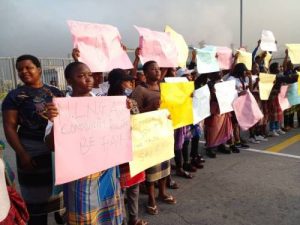 Port Harcourt — Amidst the recent ground-breaking ceremony for the Nigerian Liquefied Natural Gas, NLNG, Train-7 project, Finima Community in Bonny, host to the facility, says it has severed all ties with the project owners, Nigeria LNG Limited, over the company’s refusal to accord them the host community rights as stipulated by law.
The community, which is made up of one family, Buoye Omuso Brown House, said it was regretable that the company carried on with the ground breaking for Train-7 without addressing the issues raised by the community, which led to protest last week.
Chairman of Buoye Omuso Brown House, Chief Inima Dickson Brown, accused the company of conniving with the traditional leadership in Bonny to hire thugs that unleashed mayhem on the protesters at the company’s gate.
Brown said Finima Community is demanding the full implementation of the extant laws of Nigeria as codified in the Nigerian Oil and Gas Industry Development Act, and the Community Content Guidelines, CCG, of the Nigerian Content Development and Monitoring Board, NCDMB.
He emphasised that Finima Community did not create the NOGICD Act, but since the law was there, they were only asking for the provisions of the law to be implemented by  Nigeria LNG Limited.
He said: “For those that do not know, let us put it on record that NLNG Ltd is sited on Finima land and all negotiations prior to the siting and construction of both NLNG’s Industrial and Residential areas were done exclusively with the leadership of Finima.
“We challenge any person, persons, or group of persons that has evidence to the contrary, to please come forward with same, and not to be peddling false information on social media for the gullible to believe.
“Meanwhile, we have resolved, and do hereby suspend and severed all dealings and cooperation with Nigeria LNG Ltd until further notice.
“We call on NLNG to obey the laws of the Federal Republic of Nigeria, if indeed she is a good corporate citizen as claimed. One thing is statutory sure, and that is Finima community will not rest until the NOGICD Act and the CCG are implemented.”
Accusing the NLNG of being economical with the truth, especially in its dealings with Finima, the community said it was regrettable that days after the attack on protesters, the traditional leadership in Bonny have not come out to deny the incident or condemn it.
Chief Brown said Finima Community has tried to interface with NLNG on several occasions without much success, hence Finima Capacity Development Committee, FCDC, was set up to drive the process.
He said Finima leaders set up FCDC in 2014 to drive the process of benefiting from the NOGICD Act and the CCG which Nigeria LNG has denied Finima community over the years.
The community chairman stated that after the community had hoisted a protest banner at NLNG roundabout in Finima on January 1, 2021, the company wrote them a correspondence assuring of meeting for dialogue in the coming days, but never did.
He added: “With the coming on stream of the Train 7 project, FCDC and Finima Community intensified efforts and mounted pressure on Nigeria LNG Ltd through letters and petitions to various government agencies and ministries. Yet, Nigeria LNG remained adamant.
“After a period of over two months of inaction by the Nigeria LNG Ltd, it dawned on Finima community that the company has reneged on its promise to resolve the issue yet again.
“It became obvious that NLNG Ltd does not want to, and has made up its mind not to accord Finima Community the host community rights. This deceit on the part of NLNG Ltd prompted FCDC and the community to commence more rounds of petitions against NLNG Ltd to various government agencies including the security agents”.
He continued: “Several petitions (were written) to the Inspector General of Police, the DSS, the Joint Task force, the chairman of Bonny LGA, the NCDMB, the Minister of State for Petroleum Resources, the Rivers State Government, the House of Reps Committee on Host Community and so on.
“All the petitions stated above were not treated as they should have been because of the influence of NLNG Ltd. It was as a result of the above that the people of the community embarked on a peaceful protest to bring home their demands.
“It was as a result of the above that, on the 10th of June 2021, the people of Finima marched out in their numbers to peacefully protest against Nigeria LNG Ltd for refusing to accord Finima Community the Host community rights as contained in the NOGICD Act of 2010 and the NCDMB Community Content Guideline (CCG) 2017.
“It is therefore mischievous and irresponsible for NLNG Ltd to describe the peaceful Finima community protest against it on 10th of June 2021, as a “disagreement between two groups on Bonny Island” when evidence abound that NLNG Ltd. and the Bonny Kingdom traditional institution sponsored the attack on peaceful Finima Community protesters.
“The people of Finima, who took part in the peaceful protest cannot be described as a group, but should be rightly described as “Finima Community – the Host Community and Landlord. NLNG Ltd should be bold enough to own up to the root cause of the protest and to the fact that it was a peaceful protest by an unarmed good and peace-loving people of Finima demanding for their legal rights.”