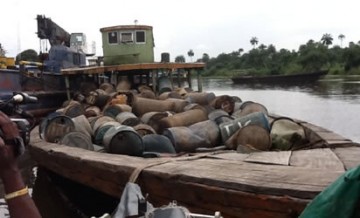 Port Harcourt — The Economic and Financial Crimes Commission, EFCC, has expressed optimism that the Federal Government was winning the war against oil theft and illegal bunkering of petroleum products in the country.

Olayinka explained that the anti-graft agency has secured numerous convictions on past suspects handed over to them by the Nigerian Navy, adding that several other cases were ongoing.

Receiving the suspects, the EFCC official assured that the agency would carry out an independent investigation into the case and commence prosecution where necessary.

According to him, “We are winning the war against oil theft because we have a lot of cases ongoing, we have secured several convictions and most vessels used in illegal bunkering have been forfeited. The trend of this crime is reducing, so I will say we’re winning the war.

“We have had a lot of convictions on most of the cases handed over to us by the Nigerian Navy. We have a lot of ongoing cases and whenever we secure prosecution we always publish on our website. There is no conviction that we have that is not published.

Earlier, while handing over the suspects, the Executive Officer, NNS Pathfinder, Captain Adegoke Ebo, said the move was in line with the directive of the Chief of Naval Staff, Rear Admiral Ibok Ete-Ibas’ zero tolerance for oil theft and sundry maritime crimes.

Ebo explained that the suspects were apprehended on June 12th, 2019 at Dutch Island while bunkering suspected illegally refined diesel on a wooden boat popularly known as Cotonou boat.

“In line with the Nigerian Navy rule, on the 12th of June 2019, NNS Pathfinder patrol team intercepted and arrested five suspects involved in illegal bunkering activities at Dutch Island creek.

“At the time of arrest, we found on the wooden boat laden with suspected illegally refined AGO. Consequently, they were remanded in the base for preliminary investigation and upon completion of our investigation. We have been mandated by our headquarters to hand them over to EFCC for further investigation and prosecution

“Let me also reiterate here that in line with the Chief of Naval Staff’s and NNS Pathfinder’s zero tolerance, I want to urge all perpetrators of illegal activities such as crude oil theft, illegal bunkering and other maritime-related activities that we will not relent in our efforts and we will continue to be resolute in the combat against oil theft.”