West African states, US may work on new trade agreement 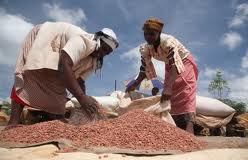 “A trade and investment framework agreement with the Economic Community of West African States can significantly contribute to economic growth and increased international competitiveness on both sides of the Atlantic,” Marantis said. “I welcome the support that visiting heads of state from Cape Verde, Senegal, and Sierra Leone have given to the idea of this proposed new partnership. We are excited about the opportunity to work with these important West African partners — with guidance from our stakeholders and members of Congress — on boosting our trade and investment relationship.”

On March 28, President Obama met with the four African leaders at the White House. As a follow-up to that meeting, Marantis and other senior Obama administration officials proposed that the United States and ECOWAS explore the possibility of concluding a TIFA, among other steps, to increase U.S.-Africa trade and investment, USTR said. The proposal demonstrates the United States’ ongoing support for ECOWAS, as well as the United States’ continued commitment to Africa’s regional integration and to deepening U.S. economic engagement in West Africa, USTR added.

If concluded, the TIFA would create opportunities for U.S. companies interested in doing business in West Africa, and would assist in addressing impediments to U.S. trade and investment in the region, USTR said. It would also provide a forum for discussion of topics relevant to economic integration efforts in West Africa, USTR added.

USTR said the United States has been using these bilateral and regional TIFAs to support regional integration, encourage greater two-way trade and investment, build capacity in the African private sector, and help support opportunities for U.S. businesses in Africa.

Marantis and the four African leaders participated in a March 29 economic growth roundtable discussion with representatives from key U.S. agencies including the Department of State, the U.S. Agency for International Development, the Millennium Challenge Corporation, the Export-Import Bank and the Overseas Private Investment Corporation. The African leaders, USTR said, discussed the benefits of deeper economic ties between their countries and the United States, enhancing two-way trade and investment, furthering regional economic integration within Africa, and strengthening the four countries’ business and investment environments — actions all aimed at producing broad-based economic growth.

They also discussed a number of U.S. initiatives aimed at enhancing trade and investment relationships with the four countries, including the African Growth and Opportunity Act (AGOA), a trade preference program that allows eligible African countries to export the vast majority of goods they produce to the U.S. duty free. Sierra Leone, Senegal, Malawi and Cape Verde are each eligible for AGOA benefits.