Why governmentn will not negotiate with GHIL on Ajaokuta – Minister 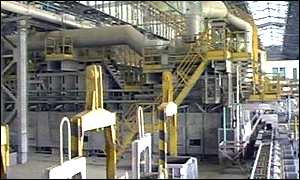 21 October 2011, Sweetcrude, Abuja- The Minister of Mines and Steel Development, Arc. Musa Mohammed Sada has stressed that the Federal
Government would not entertain an out of court settlement nor would it enter into further negotiations with Global Infrastructure Holdings Limited, GIHL, over the cancellation of the concession of Ajaokuta Steel Company Limited (ASCON).

Sada, who said this at a Policy Dialogue and briefing with media in Abuja, said government would see the case through, adding that it would not withdraw from a case with an investor who he alleged cannibalised the assets of the steel company and breached the terms of the concession agreement.

He noted that the present administration was determined to wrest the management of the billion-dollar Steel Corporation from the Indian managers, whom he accused of “asset-stripping and round-tripping.”

According to him, “There will be no negotiation; we cannot enter into any negotiation with a company that has repeatedly breached the terms of agreement. What we must do is to demand for our rights and ensure that things are done properly.

“We have already articulated our position on the issues and hope the matter will be amicably resolved soon.”

He, however, said the government and GHIL that was purported to have bought the entity are in arbitration. He said both parties met last month and would meet again in January next year.

The Minister explained that the meeting “will enable Nigeria to present its counter claim.”

Meanwhile, he said, government has concluded plans to re-operationalise some of the completed units of the Steel company such as the Engineering Workshop, the Thermal Power plant, and the Rolling Mill which workers retained on the job are being paid regularly.

“The arbitration does not say we cannot operate on our asset, and we are ready to go ahead and do what we must to keep the place afloat even as we try to find a way to resolve what has turned out to be a sham of a concession and a ridicule to our national pride and resource,” Sada stated.

Sada pointed out that although the concession to GHIL based on a principle of capital importation, which would have seen the Indian steel manufacturer invest billions into the company, however “what we have seen over the years is a continuous stripping of the assets of the company by people who are supposed to be investing money into the company.”

He added that, “What they met on the ground in terms of raw materials, they did not try to improve upon that, rather they just sat on the raw materials and consumed and drained the natural resources.”

The Minister further hinted that the disclosure that more than N37 billion borrowed by GHIL from local banks was partly to blame for the failed state of some of the banks.

On government’s plan for the firm and the Nigeria Iron Ore Mining Company (NIOMCO), Sada said since the government does not want to repeat past mistakes, and has therefore raised an economic team to carry out a study on what to do with the two entities.

The team headed by the Coordinating Minister for the Economy, Dr. Ngozi Okonjo- Iweala, is to study the possible scale of return from the plants.

“The government wants to transform the place. As I am talking to you, there is a study of economic rate of return on the two facilities. I think it is about to be concluded very soon. It is being co-ordinated by the Minister of the Economy because it is not a technical thing. It is strictly business.

“All the factors will be put into consideration, as we don’t want a situation whereby a private investor will come and look at it and say I can operate it. No. We want professional managers to contact professional engineers, get the input from them and get their report so we know this is their direction.
So, we will be able to advise the government on the various available options, between concession, outright sale or joint venture. This is where we are now.”

On the control of explosives, Sada said the ministry and stakeholders have agreed that explosive dealers and directors of user companies will be thoroughly screened before licences are issued.

He said it was unanimously agreed, after a stakeholders’ conference that held in August, that a review of the Explosive Act of 1964 and the Explosive Regulations of 1967 be carried out for both instruments to address emerging needs, trends and challenges associated with explosives handling, as well as issues that border on security, manufacture and export.