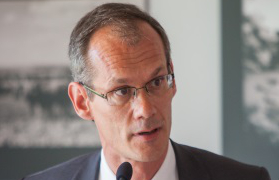 06 September 2016, Lagos – Following prevalent shortfalls and delays in meeting obligations to Joint Venture, JV, partners in the upstream oil and gas operations by the Federal Government, a key JV partner has partially absolved the government of blames.

According to the Managing Director/Chief Executive of Total Exploration and Production Nigeria, Mr Nicolas Terraz, the problem is attributable to the sustained low prices of crude oil, at the International market the main source of revenue for government’s obligations.
He stated: “Governments are facing gross revenue shortages resulting sometimes in the inability to meet their Joint Venture, JV, funding obligations.
“Throughout 2015 to now, we face a challenging economic environment, due to the sharp fall in the price of oil. This environment requires us to adapt and quickly take actions that will sustain us while we prepare for the future when the market situation improves.
“The current context is challenging for both the industry and host countries. Oil and gas companies must generate sufficient cash flow for capital investments”, he stated.
Meanwhile, Terraz has said that his company’s Egina deepwater development project, which started three years ago will add 200,000 barrels of oil equivalent per day to Nigeria’s production by 2018.
Speaking during the just concluded Nigeria Annual International Conference and Exhibition, NAICE, in Lagos, Terraz said: “Egina has the highest deepwater local content ever in a project.
Amongst others, the development of Lagos Deep Offshore Logistics Base, LADOL yard and significant work on seven Nigerian fabrication yards of various projects generate direct and indirect employment and businesses for Nigerians during five years of the project.
He also noted that the company has completed pre-commissioning and the process for commencement of delivery of domestic gas to the Eastern sector via its Northern Option Pipeline, NOPL. One of the off-takers of the gas is the Alaoji Power Plant.
He explained: “In June 2016, we completed the onshore construction phase and commenced offshore works for the remaining part of the Ofon Phase 2 project which achieved gas flare out in December, 2014.
“This was recognised by the World Bank sponsored Global Gas Flaring Reduction Partnership, GGFR, which gave an Excellence Award to our Ofon-2 Project on 9th September 2015, for this achievement”.
He further said that Total’s upstream branch has added over 2.3 billion barrels to Nigeria’s production from 1966 to 2015 and in the last five years, has made approximately $10 billion investments in the country.
According to Terraz, “Through decades of executing development projects, Total’s activities have contributed to creating jobs and human capacity development in Nigeria”.