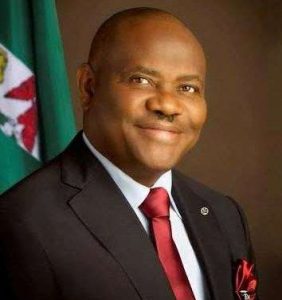 06 April 2018, Sweetcrude, Port Harcourt – Rivers State governor, Chief Nyesom Wike, has exonerated his administration of any blame on the lingering hydrocarbon soot being experienced in the state.

Since the inception of the hash tag #stopthesoot campaign, the state government has been criticised for not doing enough to salvage the situation.

But, Governor Wike, while playing host to civil society organisations in the state, said every effort by his administration to address the air pollution has been hindered by the non-cooperation of the Federal Government.

According to the governor, “The issue of soot in Rivers State, I have said it before, when I hear people say the state government is doing nothing, I laugh because it is a lie. It is unfortunate that the Federal Government does not want to support the state.

Also, the Chairman, Rivers State House of Assembly Committee on Environment, Mr. Christian Ahiakwo, said the state government has been playing its role in tackling the soot in the state.

Ahiakwo, who spoke when the Special Adviser to the governor on pollution control, Mr. Nwuke Anucha, paid a familiarisation visit, called on the Federal Government to give needed attention to air pollution in the state.

He explained that the recommendation by the technical committee on soot, which was set up two years ago to end it, gave some roles to the state and others to the Federal Government.

“Flaring of gas from the refinery, the setting of fire on petroleum products by the Nigerian Navy; these are the two major contributing factors to the  soot in the state”.