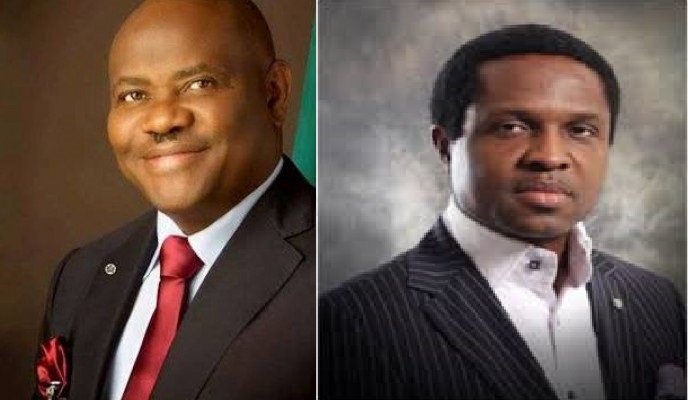 Port Harcourt — Rivers State Governor, Nyesom Ezenwo Wike, and the Governorship aspirant of the All Progressives Congress in the State, Mr Tonye Cole, have traded words over alleged receipt of $50million and shady sale of gas turbines and other assets in the state, to Sahara Energy.

However, the APC governorship aspirant and former Chairman of Sahara Group, Tonye Cole has said he has no case to answer in respect of the alleged $50million and shady sale of Rivers assets levelled against him by Governor Wike, describing the allegations as a figment of the governor’s imagination.

Governor Wike recently said Tonye Cole will have to answer to what had happened to the $50 million his Sahara Energy Company received through the Access Bank from the Rivers State government when Chibuike Amaechi was governor.

However, governor Wike said it should not be a situation where the former governor will bring his business partner to become governor of the State when they have both sold and bought assets of the State including gas turbines.

“He (Cole) must account for the $50million they took from our account. Whoever knows him should tell him. $50million was taken from Rivers State Access Bank account and transferred to Sahara Energy account. And I asked them what is the job you people did for Rivers state? Can I see the contract paper, did you people loan us money?

“You think you can sell this state. The former governor thinks that he can bring his business partner, after you have sold all our gas turbines, Olympia hotel, collected our $50million cash.”

Meanwhile, Tonye Cole has said that there was nothing much to say because the contracts and all the documents were in the public domain.

Cole wondered why after eight years down the line, he has not been indicted or invited to any court to answer any case relating to the allegations levelled against him by Governor Wike.

“This is an issue that is in the public domain. In other words you all have the freedom of information Act. The contracts and all the documents are available for everybody to go and take a look at. Do take a look at it, research it yourself and exactly what happened there. It is not hidden.

“So, the documents are there for all to see. I am sure that when you see it (contract documents), you will also explain why eight years later there has been no court case, no indictment and we are still moving around freely.”

Governor Wike also berated the former director general of the Nigerian Maritime Administration and Safety Agency, NIMASA, Dr Dakuku Peterside, for threatening the peace and stability of the state over the arrest, detention and arraignment of a federal lawmaker, Farah Dagogo.