Wike threatens to shutdown oil companies, others over VAT remittances 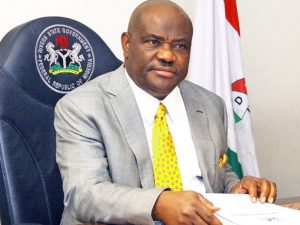 Port Harcourt — Rivers State Governor, Nyesom Ezenwo Wike on Wednesday threatened to shutdown oil companies, banks and other businesses operating in the state, that will continue to remit Value Added Taxes to the Federal Inland Revenue Service, without recourse to the state’s tax law.
Governor Wike, speaking during a stakeholders’ meeting with representatives of the oil companies and other businesses in the state, said that he will not allow proceeds of value added tax generated from the state to be paid to ‘Abuja people.’
The governor particularly warned oil companies and business owners not to remit their Value Added Taxes to anywhere else but the state. He vowed to seal off any company undermining the state’s 2021 VAT law.
The governor insisted on stopping the Federal Government from collecting VAT in the state regardless of the consequences.
“I don’t want you to fall prey to the people who think they can use force to take our money. If you want to take advantage and say you don’t know who to pay to, it is a lie, you know.
“In June N15.1 billion was collected as taxes in Rivers State but N4.7 billion was given to Rivers State, N46.4 billion was collected from Lagos State but Lagos was given N9.3 nbillion.
“Kano generated N2.8 billion and was giving  N2.8 billion
“Have you seen the injustice in this country? I will not be governor forever, it’s not about me but about the system. Let the right thing be done,” he stated.
Governor Wike said Rivers State was ready to challenge the move by the Federal Government to lobby the National Assembly to add VAT to the Exclusive List.
He said the state was collecting only VAT because the law empowered it to do so, and he would not tolerate any attempt by the Federal Inland Revenue Service (FIRS) to undermine it.
“We filed the Value Added Tax collection action against FIRS and the Office of the Attorney General representing the Federal Government in 2020.
“In July 2021 the Chairman of FIRS wrote to the National Assembly through the Office of the Deputy Speaker of the House of Representatives to ammend the Constitution and empowered the Federal Government to collect VAT. They knew what they were doing was unconstitutional that’s why they wrote for the constitution to be amended to Include VAT in the exclusive legislative list.
“This was exactly what we were challenging in Court so they tried to include it through the back door. Corruption is not only about people collecting money, corruption is also doing things illegally,” Wike said.
It will be recall that the  Federal High Court in Port Harcourt had, in its judgment last month, in a suit marked FHC/PH/CS/149/2020, held that the Rivers State government had the powers to collect VAT within its territory.
On Monday, a stay of execution filed by the FIRS was struck out the court.
FIRS had approached the court seeking a stay of execution on the earlier judgment of the court that stopped FIRS from collecting VAT.
The Presiding Judge Stephen Pam said granting the application would negate the principle of equity. He noted that inasmuch as the state government and the state legislature had enacted a law in respect of the VAT, courts were bound to obey the laws.
He noted that the state government and the state house of assembly had duly enacted Rivers State Value Added Tax No. 4, 2021,  making it a legitimate right of the state to collect VAT.
The judge said the law remained valid until it was set aside by a court of competent jurisdiction, adding that the law enacted by the state legislature remained valid.