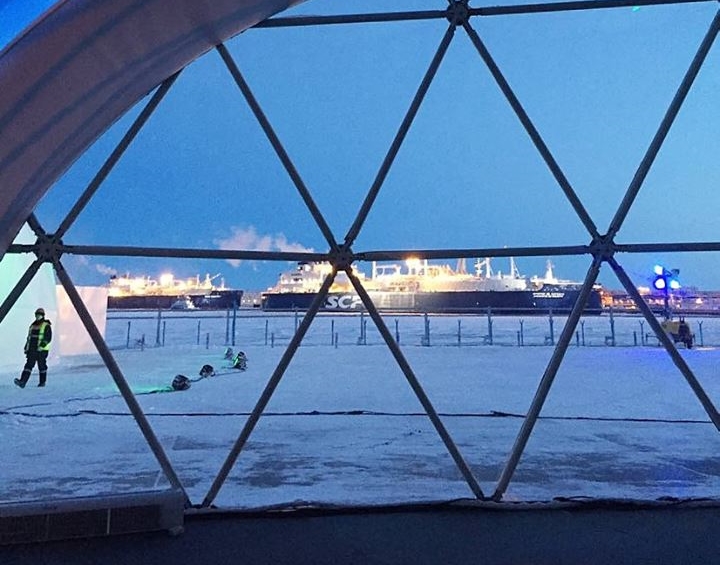 11 December 2017, News Wires – France’s Total said that the first cargo of liquefied natural gas from the Novatek-operated Yamal LNG project is ready to depart the facility in the Russian Arctic.

Russia’s largest independent gas producer Novatek began LNG production from the facility’s first liquefaction train on December 5, adding then that the first cargo was set to leave the facility on Friday, onboard the first of fifteen Arc7 ice-class carriers to serve the project, the 172,600-cbm LNG tanker Christophe de Margerie.

Russia’s president Vladimir Putin has given the order to begin the loading operation at the $27 billion project on the Yamal Peninsula.

Novatek, through its social media channels, released photos showing the official ceremony of the first cargo departure from the giant liquefaction plant.

The Novatek-released photo also shows a second vessel at the facility, which according to the vessel tracking data by the marine data provider, VesselsValue, is the 172.410-cbm LNG carrier named Boris Vilkitsky.

The vessel was built by South Korean shipbuilder Daewoo Shipbuilding Marine Engineering and delivered to its owner during November.

The three-train Yamal LNG plant, designed to produce about 16.5 million tonnes per year, will liquefy natural gas from the South Tambey field on the Yamal Peninsula.

The second and third trains will be commissioned in 2018 and 2019 respectively, Total said.

The project is a joint venture between Novatek, the operator with a 50.1 percent stake, China’s CNPC and Total of France with a 20 percent stake, each and China’s Silk Road Fund with a 9.9 percent stake.