on: December 21, 2017In: Community Development, featured 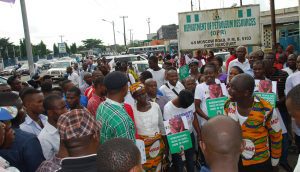 21 December 2017, Sweetcrude, Port Harcourt — The people of Ogoni in Rivers State under the aegis of Ken Saro-Wiwa Associates on Wednesday barricaded the entrance of the zonal headquarters of the Nigerian National Petroleum Corporation, NNPC in Port Harcourt over an alleged plan to resume oil production in Ogoniland.

The protesters numbering more than 100 and led by the Coordinator of the Ken Saro-Wiwa Associates, Mr. Gani Topba, demanded that the planned resumption of oil exploration and production activities by one company called RoboMicheal Limited in Ogoniland should be halted.

Topba while handing over a copy of his protest letter addressed to the Group Managing Director of NNPC, Dr. Maikanti Baru, said the group has already written to the National Assembly that until the cleanup of Ogoni is implemented, there will be no resumption of oil exploration nor production activities in Ogoniland.

The Ogoni leader who condemned the alleged issuance of a license to operate OML11 to RoboMichael Limited to resume exploration in Ogoniland, also demanded the sack of the Group Managing Director of NNPC, Dr. Maikanti Baru, for an attempt to ignite a fresh crisis in the area.

He warned that the people of Ogoni will be forced to embark on a protest to the headquarters of NNPC in Abuja on the 4th of January 2018, if the decision to resume oil production in the area is not rescinded with immediate effect.

According to him “The people of Ogoni have come out in their numbers to register their case to the government on how their case can be resolved. In 2012, NNPC had an agreement with Shell on OML11 and Shell said they have transferred OML 11 license to NNPC.

“In 2017, NNPC through NPDC issued a legal license to RoboMichael and we have written the Senate, House of Representatives, Security agencies and we want that decision to be reversed before January 4th (Ogoni Day).

“If they don’t do it, we will mobilise our people to NNPC tower in Abuja for a protest on the 4th of January, so that International community will know we are peaceful in our agitations.

“23 years ago our people quitted Shell from Ogoni but today NNPC, Shell, and RoboMichael want to pass through the back door to resume operation in Ogoniland. It will not work.

“What we are demanding is that the license issued to RoboMichael to operate OML11 should be retrieved. We want Buhari to revoke Shell License on OML11. He should also sack the GMD of NNPC because he has done what is capable of igniting a crisis in Ogoni.

Gani noted that there is genocide committed against the people of Ogoni, adding that the pollution of their water and the entire environment by oil is claiming lives.

He also called on the Rivers State Governor, Chief Nyesom Wike, to intervene in the matter to avoid the break down of law and order that may arise following the issuance of the license to RoboMicheal Limited

“There is genocide in Ogoni because our waters have been destroyed. The UNEP report has been abandoned. The highest event we have today in Ogoniland is a burial.

“We are demanding that every Ogoni son in the Governing Council as Board Trustee of the Hydrocarbon Pollution Remediation Project, HYPREP, to resign within 14 days.”

Addressing the protesters, the Head of Operations, Crude Oil Marketing in NNPC Port Harcourt zone, who received the protest letter from the protesters, Engr. Bob-Manuel assured that the letter would be delivered to the head office in Abuja immediately.