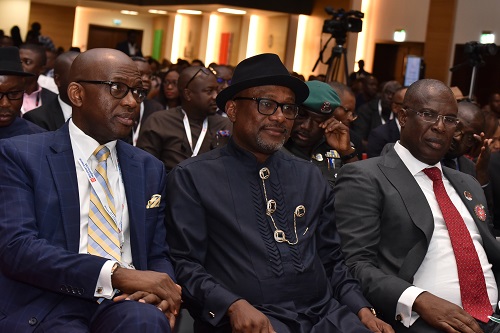 *Mr. Tony Attah, MD of the NLNG, Engr. Simbi Wabote, Executive Secretary of the NCDMB and Chief Timi Sylva, Minister of State for Petroleum Resource at the just concludes PNC which took place in Yanagoa.

Yenagoa — The Nigerian Content Development and Monitoring Board (NCDMB) has completed the implementation of 20 short term initiatives as part of the 10-Year Nigerian Content Strategic Roadmap.

The Executive Secretary of NCDMB, Engr. Simbi Kesiye Wabote stated this on Tuesday at the opening of the 9th edition of the Practical Nigerian Content Workshop held in the conference hall of the new NCDMB headquarters in Yenagoa, Bayelsa State, with the theme, “Leveraging Local Expertise for Market Growth and Expansion”.

He confirmed that 25 initiatives were planned for the first two years of the roadmap and the duration of five items would be extended, adding that the percentage of Nigerian Content implementation had moved from 26 percent to 30 percent in the last two years of the 10-year plan.

He stated that NCDMB will mark its 10th year anniversary in 2020 and would organize a strategy review session and “evaluate the remaining eight years of the roadmap to put in place necessary measures to meet the 70 percent Nigerian Content target by the year 2027.”

As part of his welcome speech, the Executive Secretary signed agreements for NCDMB’s partnerships in the establishment of two gas plants and a base oil facility.

The first agreement was with Dr. Mason Oghenejobo of Bunorr Integrated Energy Ltd for the establishment of 48,000liters/day Base Oil Production Facility, to be located at Greater Port Harcourt Area, Rivers State.

The second agreement was with Mr. Lanre Runsewe of Rungas Limited for the establishment of 400,000 per day Type-3 LPG Cylinders manufacturing plant, to be developed at Polaku, Bayelsa State, in partnership with NCDMB.

The third deal was executed with Engr. Chibuike Achigbu of Chimons Gas Ltd for the establishment of 168,000MT per annum LPG Loading and Receiving Terminal, to be located at Koko, Delta State.

Wabote expressed hope that the partnerships would help to reverse capital flight currently associated with these products, with the estimated turnover put at $360million per year.

He thanked the Governing Council of NCDMB under the chairmanship of the Minister of State for Petroleum Resources, Chief Timipre Sylva for giving approvals for the partnerships.

Giving detailed reports of the Board’s achievements, Wabote reported that NCDMB had secured approvals for the award of nine contracts from the Federal Executive Council to progress work on the development of oil and gas parks in Akwa Ibom, Bayelsa, and Cross River states, to domicile and domesticate manufacturing in-country.

He mentioned that the Board took up equity in the 12,000 barrels per day AZIKEL Hydroskimming Modular in Bayelsa State after the first partnership with Waltersmith Modular Refinery in Imo State.

He also stated that 20 marine cadets sponsored by the NCDMB are currently overseas to acquire sea-time experience in international waters in Singapore, Australia, USA, Malaysia, and China.

He added that “we have set up additional 6 ICT labs in various secondary schools in the last one year, bringing the total to 24. We have trained over 1,000 teachers as part of the Board’s intervention in STEM education.”

Giving insight into the Board’s plans for year 2020, the Executive Secretary said there will be roll-out of supplier development programs using our industrial parks as a platform, including synergies with NCEC applicants.

He said the Board will also take up 40 marine cadets for seatime training; upgrade two vocational education institutions and set-up five ICT Labs in secondary schools. NCDMB will also train another batch of 1,000 teachers in STEM Education.

Other plans include the planned commissioning of 5,000 barrels per day Waltersmith Modular Refinery initiative, completion of the NCDF Remittance Forensic Audit visitations and wrap up of the tripartite reconciliation sessions by 31st December 2019.

He also reported that NCDMB had finalized power supply arrangement for its new Headquarters building and the Oil and Gas park at Emeyal-1, Bayelsa State and a power provider for the park in Calabar has also been identified.

With regards to the Sectorial and Regional Market Linkages, he stated “the Board has been co-opted by the Federal Government into the Local Content Working Committee of the 3,050MW Mambilla Hydro Electric Power Plant to link the capacities and capabilities built in the oil and gas sector into the delivery of the multi-billion dollar project.

“In the coming year, we intend to extend our collaboration with sister agencies and other MDA’s to enhance enduring partnerships that support the patronage of local investors.”

Delivering his Ministerial Address, Chief Timipre Sylva, charged local vendors to deliver premium services and support the Federal Government’s strategy of using Local Content to drive down the cost of crude oil production, increase the contribution of the oil sector to the Gross Domestic Product (GDP) and guarantee the security of oil production.

He said operators “must not allow Local Content to become an excuse for cost over runs, slippages in project delivery schedule or shoddy jobs. We must therefore take practical steps to ensure that we curtail the various elements that contribute to the high cost of production”.

He averred that the entire country was looking up to the sector for increased revenue earnings to fund annual budgets and develop critical infrastructure.

The Minister also commended NCDMB for the development of its 17 storey headquarters building, with a World Class Conference Centre right in the heart of the Niger Delta, executed by a wholly Indigenous Construction Company, Megastar Technical and Construction Company Limited.

He thanked President Muhammadu Buhari and the Federal Executive Council for granting timely approvals which helped to speed up the completion of the project.

According to him, the building serves as a strong attestation of Mr. President’s love and commitment to the development of the Niger Delta Region.

He further charged multinational oil companies and their indigenous counterparts to take a cue from NCDMB and engage more local contractors in various projects in the oil and gas industry.