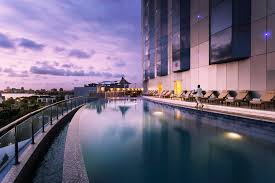 In a statement signed by the company’s Managing Director and Chief Executive Officer, Adetunji Oyebanji. Mr Oyebanji to the Nigerian Stock Exchange, NSE on Monday, the oil firm said the acquisition was made after finalising discussion on the property with the Asset Management Company of Nigeria, AMCON.

The memo said the acquisition is, however, subject to the terms and conditions of agreed between the parties.

According to the statement, the hotel asset would drive the growth of the company’s revenue against the fuel margins, which it said had remained stagnant in the market for several years.

“Fuel margins in the industry have remained stagnant for several years in the highly competitive and regulated industry,” the disclosure said. “We anticipate that this asset will contribute positively to earnings and underlines the faith of its stakeholders in the future of the Nigerian economy.”

11 Plc said the acquisition of Lagos Continental Hotel is in line with its diversification plans, adding that it already “owns several prime properties in its real estate portfolio rented to blue-chip tenants.”

“However,” it said, “in the short term, cash flow and earnings before interest, tax, depreciation and amortisation could be under strain as a result of funds needed to renovate and upgrade the hotel to attract a 5-star branding.”

According to the statement, current employees of the hotel “would be treated with the utmost dignity and respect ” during the transition, as the company sought their cooperation to make the takeover a smooth one.

As part of its branding policy for the new asset, the company said it would partner international brand to provide the luxury apartment service, as well as raise the standard of Lagos Continental Hotel from its current condition with significant investment that would transform the hotel into a top brand in the hotel service market.