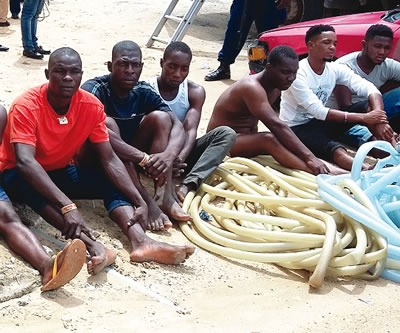 Port Harcourt — The Port Harcourt Zonal Office of the Economic And Financial Crimes Commission,  EFCC,  has commenced investigation of 11 suspected illegal oil bunkerers handed over to it by the Nigerian Navy.
The suspects were handed over to the EFCC by the Nigerian Navy, Forward Operating Base,  Bonny, Rivers State, after being arrested for suspected involvement in illegal oil bunkering.
Handling over the suspects to EFCC, Navy Captain B.I Yahuza,  disclosed that they were arrested by Naval operatives on September 22, 2020 for conveying 320 drums of suspected illegally refined Automotive Gas Oil, AGO.
The 11 suspects are, Indongesit Effiong Mfon;  Asuquo James; Samuel Bassey; Blessed Effiong Bassey; Victor Edet Attah; Edet Okon;  Nse Jackson Okon; Innocent Effiong; Njok Okon, Uduak Asuquo and Effiong Asuquo.
A Principal Detective Superintendent of EFCC, Ani Davis Stanley,  received the suspects on behalf of the Port Harcourt  Zonal Head, Abdulkarim Chukkol.
Stanley who commended the synergy existing between the Navy and the EFCC, assured that thorough investigation of the case would be done.