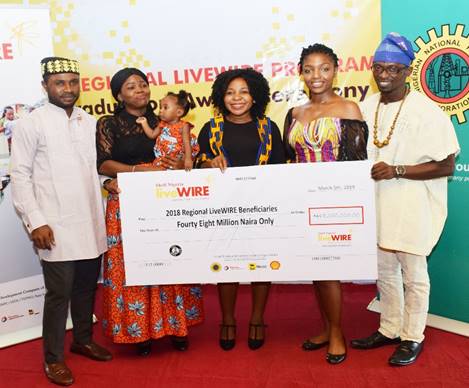 *A cross-section of the graduating Regional LiveWIRE Nigeria beneficiaries.

07 March 2019, Sweetcrude, Lagos — Another 120 youth entrepreneurs from seven states of the Niger Delta have been given Shell Nigeria LiveWIRE business training and N48 million by The Shell Petroleum Development Company, SPDC, Joint Venture to begin small-scale businesses in their respective states.

The expectation is that they will become models for alternative livelihoods as part of the programme to deter involvement of youths in vices.

The 120 beneficiaries received their certificates at a Regional LiveWIRE graduation ceremony in Port Harcourt on Tuesday.

SPDC General Manager External Relations, Mr. Igo Weli, described the company’s flagship youth enterprise development programme, Shell Nigeria LiveWIRE, as a potent initiative that has produced over 7,000 Niger Delta entrepreneurs since inception in 2003 with most of them now employers of labour.

He said, “Some of the beneficiaries have also been given the opportunity to participate in SPDC’s supply chain as vendors and have been linked to growth capital from other agencies.”

Speaking at the graduation ceremony, the Director of Secondary Education, Rivers State Ministry of Education, Mrs. Sokari Davies, commended SPDC and its joint venture partners for the consistent sponsorship of the Shell Nigeria LiveWIRE programme.

Mrs. Davies said, “Irrespective of the challenges in the operating environment, SPDC still deemed it necessary to empower and develop the youths. Other multinational oil companies should copy SPDC and channel resources towards the development of the youths.

That way, restiveness will greatly reduce. The government will continue to partner with SPDC because of this.

“It is indeed a remarkable day for the 120 beneficiaries and we are pleased to see this group of young entrepreneurs start-up businesses that will contribute to the economic development of our communities.”

Yolo said, ’’I owe my gratitude to Shell because no other multinational operating in our region has given back the way and manner that they have. I am my own boss now and I have been privileged to assist a lot of people courtesy of Shell.’.

The Shell LiveWIRE Nigeria programme, a part of the global Shell LiveWIRE social investment programme, enables young people to start their own business and create employment. In 16 years of operation in Nigeria, the Shell LiveWIRE has received local and international recognitions. For example, in 2011, the programme received the African Leadership Magazine award for Youth Development, Social Enterprise and Reports Award (SERA) 2010’’.

Three others won the 2017 pitching contest in LiveWIRE #Makethefuture Accelerator event held in Port Harcourt and, between 2010 and now, five beneficiaries have won the international “GO and Trade Enterprise Linkage Award’’ (which enabled them to make international trade visits to London, Dubai in United Arab Emirates and Neighbouring Ghana.)

At the national level, five beneficiaries have won the Federal Government ‘YOU WIN’ awards in 2014 and 2015. Two of them won the Central Bank of Nigeria Entrepreneurship award, while 10 others won the Tony Elumelu Foundation Award.’’

The Regional LiveWIRE programme operates in the Niger Delta region and aims to inspire, encourage and support young people aged 18-30 to start up their own businesses in the Nigerian states of Edo, Delta, Bayelsa, Rivers, Abia, Imo, Cross River and Akwa Ibom.