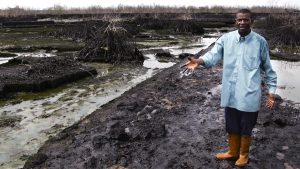 14 September 2018, Sweetcrude, Port Harcourt — Out of over 400 firms that applied for contract to clean up oil impacted sites in Ogoniland, the Federal Government has announced that only a total of 183 companies are pre-qualified for the next round of selection, which is the technical and financial bids.

To this end, the Federal Government says the submission of  technical proposal and financial bid documents by the companies for the clean up would end by 24th September 2018.

Minister of States for Environment, Mr. Ibrahim Jibril, disclosed this in Port Harcourt during a pre-contract meeting for the pre-qualified companies to demonstrate their abilities, organised by the Hydrocarbon Pollution Remediation Project, HYPREP.

The Minister represented by his Senior Technical Assistant, Mr. Ishiaku Mohammed, stated that the deadline for the commencement of the clean-up of Ogoni impacted communities would be by the end of the last quarter of this year.

Jibril noted that the processes outlined to be followed for the final selection of the companies have all been attained, adding that funds for the project have also been provided.

According to him, “The stage we are now is part of the procurement process. We have 183 companies that have pre-qualified and have been asked to submit their documents to bid for the contract.

“All bids are supposed to end on the 24 of September, after which there will be financial evaluation. There is timeline for each process. We have matching order that by the end of last quarter of 2018, people should be seen on the field.”

Also, the Project Coordinator of HYPREP, Dr. Marvin Dekil, said contractors for the project must have technical and financial competencies before they would be allowed to participate in the process.

“The Ogoni clean-up project like the Minister explained is going to be a template for the rest of the region,  it is a very important project to the Ogoni people,  Niger Delta people, for Nigerians and Nigerian government as well.