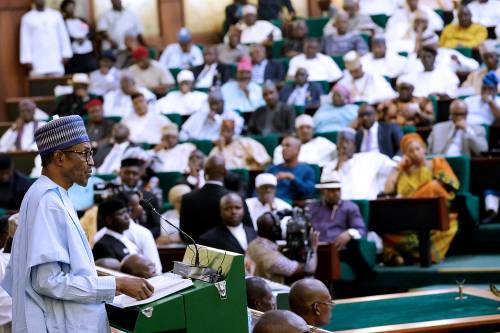 *President Muhammadu Buhari presenting the 2018 budget to a joint session of the National Assembly.

10 November 2017, Sweetcrude, Lagos — Nigeria’s 2018 budget proposals presented by President Muhammadu Buhari to a joint session of the National Assembly is described as a budget of consolidation. The key parameters and assumptions for the N8.612 trillion appropriation bill are as set out in the 2018-2020 Medium Term Expenditure Framework (MTEF) and Fiscal Strategy Paper (FSP) which include oil price benchmark of US$45 per barrel; Oil production estimate of 2.3 million barrels per day, including condensates; Exchange rate of N305/US$ for 2018; Real GDP growth of 3.5 percent; and Inflation Rate of 12.4 percent.

However, the 2017 Budget of Recovery and Growth was based on a benchmark oil price of US$44.5 per barrel, oil production of 2.2 million barrels per day, and a Naira-to-US Dollar Exchange Rate of 305.

It is believed that the rising price of crude oil in the international market, relative peace in Niger Delta region, and the expeditious passage by the NASS will positively impact the 2018 appropriation bill and help achieve its objectives.

Power
A breakdown of the 2018 budget revealed that Power, Works, and Housing Ministry headed by Babatunde Fashola had the lion share.

Of the N8.612 trillion appropriation bill, N555.8 billion was set aside for Fashola ministry.

Worthy of note is the omission of the Distribution companies from the allocation, the reason being that it is privately controlled even as the government still has a stake in them.

Acknowledging the pivotal role Distribution companies play in the power sector value chain, President Buhari informed the joint session of the National Assembly that the Power Sector Reforms still remain a work in progress noting that “although we have increased generation capacity significantly, we still have challenges with the Transmission and Distribution Networks.

Buhari admitted that the key bottleneck now is the Distribution Network where the substations cannot take more than 5,000 MW.

“This is constraining power delivery to consumers,” Buhari said adding “We are working with the privatised Distribution Companies to see how to overcome this challenge. Nigerians should rest assured that this Administration is doing all it can to alleviate the embarrassing power situation in this country.”

“This assures the Generation Companies of up to 80 percent payment on their invoices. This intervention has brought confidence back into the sector and we expect additional investment to flow through, particularly in the gas production sector,” he said stressing that is administration is committed to the development of Green Alternative Energy Sources.

“To date, we have signed Power Purchase Agreements (PPA) with 14 solar companies. We also approved: The completion of the 10 MW Wind Farm in Katsina State, a project that was abandoned since 2012; and the concession of 6 small hydroelectric power plants with a total capacity of 50 MW.

“To enable the successful take-off of these, and future Green Projects, I am pleased to inform this Distinguished Assembly that the Federal Government will be launching the first African Sovereign Green Bond in December 2017.

“The bond will be used to finance renewable energy projects. We are very excited about this development as it will go a long way in solving many of our energy challenges, especially in the hinterland,” he said.

About four days before the presentation of the appropriation bill, Niger Delta Avengers called off the ceasefire agreement they had with the Federal Government in 2016.

Meanwhile, Elder Statesman, Edwin Clark two days after the Avengers ceasefire withdrawal appealed to them to sheath their sword and maintain peace while the dialogue with the Federal Government continues.

However, to maintain peace and security in the Niger Delta for economic and social activities to thrive, the 2018 budget retained the provision of 65 billion Naira for the Presidential Amnesty Programme.

In addition, the capital provision for the Ministry of Niger Delta has been increased to 53.89 billion Naira from the 34.20 billion Naira provided in 2017.

“This is to further support the development in the region. We will complete all critical projects, including the East-West Road, which has a provision of about 17.32 billion Naira in 2018,” President Buhari explained.

This was only possible due to his administration’s mutually beneficial engagement with oil producing communities in the Niger Delta. He admitted that the engagement contributed immensely to the recovery in oil production experienced in recent months.

“We would like to thank the leadership and communities in the Niger-Delta for their continued support and to also reiterate our assurances that this Administration will continue to honour our commitments to them. We cannot afford to go back to those dark days of insecurity and vandalism.

“We all want a country that is safe, stable and secure for our families and communities. This means we must all come together to address any grievances through dialogue and peaceful engagement. Threats, intimidation or violence are never the answer,” he said.

On the international front, President Buhari thanked friends and partners in the Joint OPEC / Non-OPEC Ministerial Monitoring Committee (JMMC) who graciously granted Nigeria an exemption from the output cuts imposed on OPEC Member Countries in January 2017.

“This exemption, which was extended in September 2017, significantly helped during our most challenging time. We shall continue our positive engagement with other oil producing nations to ensure that the momentum generated is sustained,” he said.

Ogoni:
On or before the presentation of the appropriation bill, President Buhari had not deemed it fit to physically visit Ogoni land. The much he could do was to send his vice to commission the cleanup process of the damaged community.

It is unclear whether the mention of Ogoni in his presentation was to score cheap political points or campaign for 2019 general elections.

“We are working hard on the Ogoni Clean-up Project. During the year, we engaged 8 international and local companies proposing different technologies for the mandate. To enable us to select the best and most suitable technology for the remediation work, we asked each company to conduct Demonstration Clean-up Exercises in the 4 Local Government Areas of Ogoni Land.

“These Demonstrations were recently concluded and the results are being studied by the Governing Council of the Ogoni Clean-up Project.

“Although the Project will be funded by the International Oil Companies, we have made provisions in the 2018 Budget for the costs of oversight and governance, to ensure effective implementation,” he said.

Solid Minerals
During his presentation, Nigeria’s President said significant progress has also been made in the Solid Minerals development sector.

In Ondo State, for instance, he stated that work is ongoing to fully exploit the bitumen resources to meet the 600,000 MTs of asphalt imported per annum for roads and other construction projects.

To consolidate on these efforts, he said his administration has also established a 30 billion Naira Solid Minerals Development Fund to support other minerals exploration activities across the country.

In addtion, the abandoned Itakpe-Ajaokuta-Warri Rail Line have kicked-off.

“This project has been on for over 17 years. We had to take some drastic measures but I am pleased to announce that work is ongoing and we expect to commission this service by September 2018. This service will start with 7 standard gauge coaches,” he said.

In 2016, the Federal Government constituted a committee to screen operators interested in acquiring 60 percent holding for Nigerians in the proposed National fleet.

The fleet is expected to have a 40 percent foreign ownership.

It was reported that the agreement was reached in Singapore between Nigerian delegation led by the Executive Secretary of Nigerian Shippers Council and representatives Pacific International Lines, PIL.

Details of the agreement remain sketchy and with the omission in 2018 appropriation bill, one wonders if Nigerians will wait another decade to see the fruition the agreement that will birth her National Carrier.