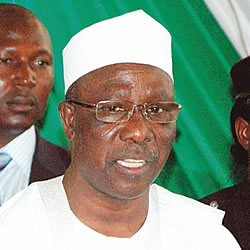 11 January 2012, Sweetcrude, Kaduna – Kaduna State governor, Patrick Yakowa, has imposed a 24-hour curfew on the state in an effort to avoid a breakdown of law and order following the activities of hoodlums and street urchins.

This is coming on the heels of the decision of the Nigeria Labour Congress in the state to suspend street protests over the withdrawal of fuel subsidy in order to avoid breakdown of law and order.

The union therefore directed its members and members of the public sympathetic to its cause, to stay indoors pending further directives.

They took the decision following the activities of some hoodlums which was posing serious security concerns.

While most residents of the city stayed indoors, a lot of street urchins were seen roaming about looking for an avenue to hijack what has so far been a peaceful protest and cause crisis within the metropolis.