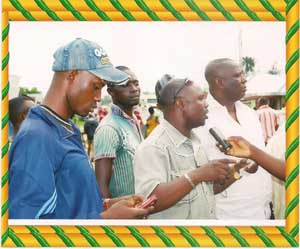 16 August, 2011, Sweetcrude, WARRI- Three youths were reportedly injured in a clash with security agents in Udu local government area of Delta state following protest over bad condition of roads in the area and non appointment of an Udu indigene into the board of the Delta State Oil Producing Areas Development Commission, DESOPADEC.

The protesting youths barricaded the popular Udu Road, leading to traffic build-up and also shut down oil installations in the area, but security agents challenged them for taking the laws into their hands. About 10 of the protesters were arrested and several motor cycles impounded by the police, according to a youth leader.