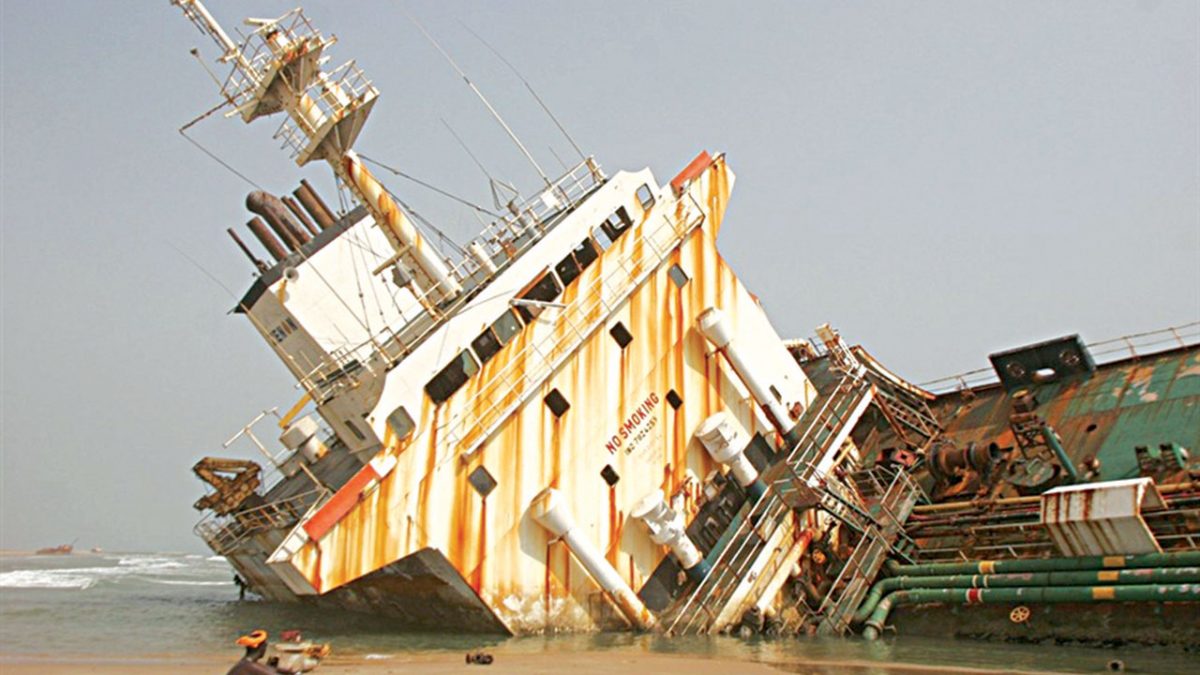 05 August 2018, Sweetcrude, Lagos — An environmentalist, Prince David Omaghomi, has said that Nigeria currently has over 3,000 shipwrecks littering its coastline, a development that will continue to endanger smooth navigation in and out of the nation’s ports.

He also advocated for the enactment and enforcement of laws against the dumping of wrecked ships on the coastline.

Omaghomi, who is the Executive Director of an NGO named Eco-Restoration Foundation, made the call while speaking with newsmen in Lagos.

He said Nigeria had become a dumping ground for wrecked ships because people found it convenient to sink ships from other parts of the world on Nigerian coastal waters to avoid bearing the cost.

He said shipwrecks, in turn, caused various problems that impacted negatively on the environment, hence the need to improve the capacity of the Nigerian Navy on the protection of the nation’s coastlines.

“We have to save our coasts by the implementation of policies, legislation and by providing the Nigerian Navy with enough coastal awareness to enforce Nigeria’s territorial integrity, even from environmental hazards like shipwrecks.

“Some people take insurance from insurance companies abroad, they dump the ships on the coasts of Nigeria because they are supposed to spend money on decommissioning the ship.

“When a ship has served its lifetime, you are supposed to take it to a dockyard and dismember it, recycle the metals, but they avoid such expenses, make money from insurance and they dump in the Nigeria where nobody cares,” said Omaghomi.

He said Nigeria is being ridiculed as the shipwreck graveyard of the world.

“Nigeria has no legislation or enforcement of existing legislation that helps people to remove shipwrecks. So people find Nigeria a favourable ground to dump their ships that are no longer in use.

“There are particular winds on the Atlantic Ocean also that push abandoned ships to the Bight of Benin which is the area on the Atlantic coast that Nigerian shorelines fall within,” he said.

Omaghomi said the money approved for some concerned government agencies in annual budgets for the removal of shipwrecks were usually not utilized for the purpose.

He said the Eco-Restoration Foundation single-handedly removed a shipwreck causing obstruction at the Lekki Beach, Lagos, in 2016 as part of its efforts to save the environment.

He also called for protection of the Mangrove Ecosystem as a natural means to preserve, protect and conserve the nation’s coastal lines and the environment.

“The laws need to be amended, the Oil Spill Detection Response Agencies need to be empowered to be able to able to enforce investigations and fund it for themselves.

“In other cases, we have an absence of laws, we have various laws that do not create the necessary environmental remediation or restoration processes.

“The laws need to be amended, fines need to be punitive, hefty and they need to deter operators from destroying the environment,” he said.