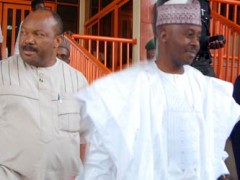 11 April 2013, ABUJA — Embattled former Chairman and Secretary of the House of Representatives Ad-hoc Committee on fuel subsidy probe, Farouk Lawal and Mr. Boniface Emenalo, yesterday, approached Justice Mudashiru Oniyangi of an Abuja High Court, begging him to quash the seven-count criminal charge that was preferred against them by the Independent Corrupt Practices and other Related Offences Commission, ICPC.

The duo who were accused of demanding and collecting bribe from the Chairman of Zenon Petroleum and Gas Ltd, Femi Otedola, as an inducement to remove the name of his company from the report of the House of Reps Ad-hoc Committee on Monitoring of fuel subsidy regime, contended that the anti-graft agency has failed to adduce any credible evidence to warrant their prosecution.

Arguing through their lead counsel, Mr. Ricky Tarfa, SAN, the lawmakers who had on February 1, pleaded not guilty to the charge and subsequently spent seven days at Kuje Prison, yesterday, insisted that the ICPC was unable to establish a prima-facie case against them.

Besides, they argued that going by the totality of the proof of evidence before the trial court, vis-à-vis the allegation, the court ought not to have granted the anti-graft agency the leave to prefer the charge against them, “since the prosecution failed to provide adequate material necessary for the judge to exercise discretion in favour of the application for leave.”

Arguing that the foundation of the case against them was not legally laid, Farouk and Emenalo, told the court that the prosecutor failed to comply with the provisions of section 155 (1)(b) of the Criminal Procedure Code which they said required that statements of witnesses be attached to the application to prefer charge.

It will be recalled that the two lawmakers had queried why the prosecuting agency refused to tender the written statement of Otedola who it had listed as one of the star witnesses that will testify in the matter.

Even though trial was scheduled to commence on the matter yesterday, however, the embattled lawmakers urged the court to go ahead and determine their consolidated preliminary objection first.

They challenged the jurisdiction of the court to try them over a charge they described legally incompetent and baseless.

In his response, counsel to the ICPC, Chief Adegboyega Awomolo, SAN, asked the court to dismiss the application, saying it was nothing but a delay tactics employed by the accused persons with a view to frustrating their trial.

According to him, the Supreme Court had held in many cases that the purpose of seeking for leave of court to prefer charges was to ensure frivolous criminal charges were not filed and not to allow the accused persons to see the details of the charge against them..

After listening to the arguments, Justice Oniyangi fixed May 2 for ruling.

Specifically, ICPC alleged that the accused persons, collected an aggregate sum of $3million, with a view to ensuring that Zenon Petroleum and Gas Ltd escaped prosecution even though the probe Committee had ab-initio found it culpable in fuel subsidy fraud.