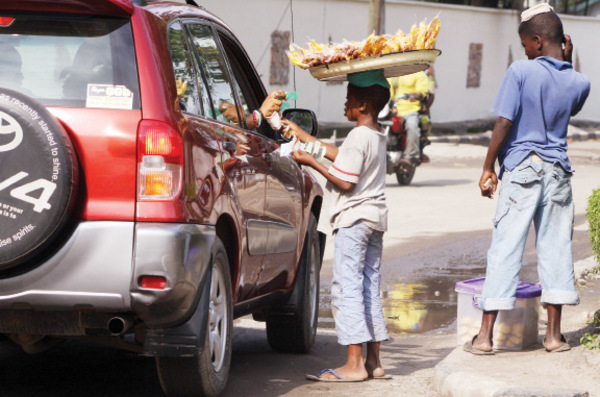 *Poverty Responsible For High Prevalence Of Child Labour In Nigeria.

14 February 2018, Sweetcrude, Abuja – The National Bureau of Statistics (NBS) 2017 Multiple Indicator Cluster Survey (MICS) says about 50.8 per cent of Nigerian children, ages between five and 17, are involved in child labour.

The NBS conducted the survey in conjunction with other partners, including the National Primary Health Care Development Agency (NPHCDA) and the United Nations Children Fund (UNICEF).

The News Agency of Nigeria (NAN) reports that child labour entails work that is mentally, physically, socially or morally dangerous and harmful to children and deprives them of opportunities for schooling and development.

UNICEF’s Monitoring and Evaluation Specialist, Mrs. Maureen Zubie-Okolo, in an interview with NAN on Tuesday in Abuja, said the figure was alarming and worrisome in spite of all legislation.

Analysing the survey, Zubie-Okolo identified North-Central region as having the highest burden of child labour of 56.8 per cent followed by North-West accounting for 55.1 per cent.

She also frowned at the number of children working in hazardous conditions in the country and identified North Central as accounting for the highest number with 49.6 per cent.

The UNICEF official also identified North West as accounting 41.9 per cent of children working in hard conditions, followed by South-South 37.9 per cent; South- East 36.1 per cent; North-East 34.1 per cent and South-East 25.4 per cent in that order.

She identified one of the most common practices of child labour as the use of children as child domestics.

Zubie-Okolo, who described the 2017 MIC survey as fifth in the series, noted that it helped to espouse the country’s progress and lapses in key areas of development, among others.

According to her, it provides opportunity for strengthening national statistical capacity, by providing technical guidance on data gathering.

She emphasised that the survey also provided statistics to complement and assess the quality of data from recent national surveys such as National Demographic and Health Survey (NDHS) and Nigerian General Household Panel Survey (NGHPS) conducted by the National Population Commission (NPopC).

She noted that, “The high level of diverse and tedious jobs that children execute in dangerous circumstances is particularly worrying. These jobs include being street vendors, beggars, car washers or watchers and shoe shiners.

“Others work as apprentice mechanics, hairdressers and bus conductors, while a large number work as domestic servants and farm hands.”

She added that, “Traditionally, children have worked with their families, but today children are forced to work for their own and their family’s survival. The money earned by child family members has become a significant part of poor families’ income.

“These children who work suffer from fatigue, irregular attendance at school, lack of comprehension and motivation, improper socialisation, exposure to risk of sexual abuse, high likelihood of being involved in crime.

“These children which are mostly young girls, should be in school but instead, they are in the market hawking food items because their families need the extra income,” she said.

According to her, there is urgent need for government to enforce laws on child labour in order to stem the tide and further reduce the burden.