7 killed in tanker fire at Idiroko 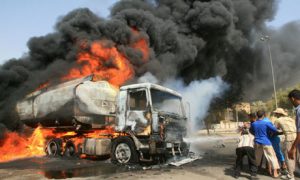 Lagos — Seven people have been reported dead in a tanker explosion in Nigeria’s south western border town of Idiroko in Ogun State.

The explosion occurred after a commercial bus collided with a petrol tanker at Ajilete on Idiroko expressway on Wednesday.

Mr Akinwunmi Olaluwoye, the commander of the Idiroko Unit of the Federal Road Safety Corps , FRSC, who confirmed that seven persons died in the explosion, said in Ota, Ogun State, that two other persons sustained injuries in the incident.

Olaluwoye said the accident happened at about 8.45 a.m.

He stated that the over-speeding bus rammed into the tanker, laden with 33 litres of petroleum products while it was ascending the sloppy Ajilete road.

The commander said that nine persons were involved in the accident, which claimed seven lives, living two others with various degrees of injuries.