79 ships to arrive Lagos ports with fuel, other items 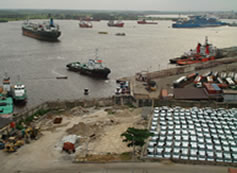 06 March 2013, Lagos – The Nigerian Ports Authority, NPA, says 79 ships would arrive at the various terminals in Lagos Ports between now and March 27.

Thirteen of the ships would arrive with petroleum products like petrol, diesel, kerosene and aviation fuel.

The NPA disclosed this in its daily publication, ‘Shipping Position’, made available to newsmen in Lagos.

It said that some of the ships were laden with fish, bulk wheat, rice, petroleum products and general cargo.

The document indicated that other ships would sail in with new and used vehicles, steel products, base oil, bulk sugar and bulk malt.

The document said that five ships were already waiting to berth and discharge petroleum products at the various oil terminals.

Two of the ships are laden with petrol, two with diesel and one would discharge aviation fuel.