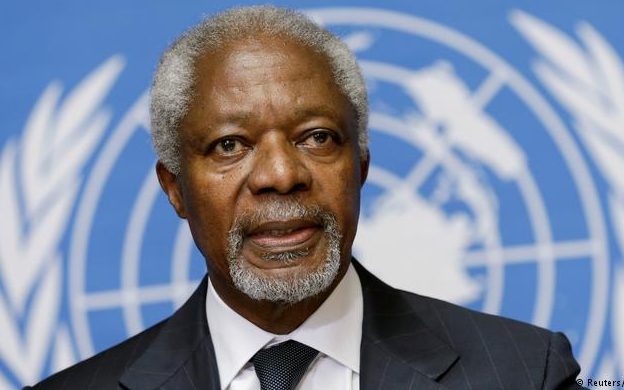 18 August 2018, Sweetcrude, Abidjan, Ivory Coast — The African Development Bank has learned with deep sadness the news of the death of Kofi A. Annan, former Secretary General of the United Nations and Noble Peace Prize Laureate, at the age of 80 in Bern, Switzerland.

“With Mr. Kofi Annan’s passing, Africa and the entire world has lost its finest diplomat, champion of world peace and development advocate, leaving a void which will be hard to fill,” President of the African Development Bank, Akinwumi Adesina said. “Today, the international community is mourning a man of great humility and righteousness; a formidable architect behind critical peace brokering agreements around the world. His leadership on spearheading the Millennium Development Goals made poverty eradication an achievable global imperative. He touched the lives of everyone he met with his dignity and quiet resolve. We stand with his dear wife, Nane, family, and friends at this time and express our heartfelt condolences”, Adesina added.

For the African Development Bank, Mr. Kofi Annan held a special place on several of the Bank’s initiatives. He was a staunch advocate of the Bank’s ‘New Deal on Energy for Africa’, a partnership-driven effort which aims to achieve universal access to energy in Africa by 2025. He was appointed as the “Champion” of the New Deal on Energy for Africa. In 2016, Mr. Annan co-chaired the Special Panel on Accelerating the Implementation of the African Development Bank’s Ten Year Strategy, launched by President Adesina.

He spearheaded several initiatives on Africa, including his chairmanship of the Africa Progress Panel and the Alliance for a Green Revolution in Africa (AGRA).

In April 2001, in Abuja, Nigeria, at a summit of African leaders, Mr. Kofi Annan made the first explicit public call for a new funding mechanism, proposing the creation of The Global Fund, to be dedicated to the battle against HIV/AIDS and other infectious diseases. He made the first contribution to the Global Fund in 2001.

Kofi Annan was Africa’s global icon. He will be greatly missed.