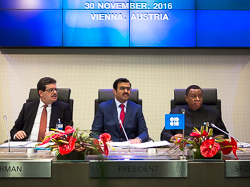 Sam Ikeotuonye 07 December 2016, Sweetcrude, Lagos – After a successful deal in Vienna, Austria, cutting its production by 1.2 million barrels per day,  the Organisation of the Petroleum Exporting Countries, OPEC, will be finalising a global oil limiting pact with non-OPEC countries at the weekend.

The meeting on December 10 in the Russian capital, Moscow, will see the non-OPEC oil producers concretise their pledge to join OPEC in a production cut to bolster the global oil market.

At its Vienna meeting last week, OPEC agreed to reduce output by around 1.2 million barrels per day, b/d, beginning in January in a bid to reduce global oversupply and prop up prices.

But, ahead of the promised cut, Russia’s oil output hit record high last week, prompting fears over its ability to keep to the pledge.

Russia, however, said it plans to use its post-Soviet era record high November oil production as its baseline when it cuts output under the deal with OPEC.

That was 500,000 b/d higher than in August, the month before Russia and OPEC reached a preliminary agreement in Algiers to cut production.

Under the week’s follow-up agreement, the first between OPEC and Russia since 2001, specific cuts for individual states were set, with almost all OPEC members agreeing to cut from October levels.

“The peak of daily production for November was 11.231 million barrels,” Deputy Energy Minister Molodtsov told a conference in Moscow.

“All our agreements will clearly be formed around this figure, he said.

Rosneft, Gazprom Neft and Lukoil have all launched new fields this year and increased drilling, despite low oil prices.