The new oil spill which is the fourth spills reported between August 2022 and October 2022 in Ogoniland, became noticeable on Sunday, on the water body around the Julius Berger construction site, the area where work is ongoing on the Bodo-Bonny Road. 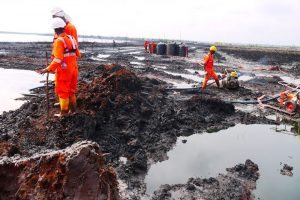 Although the cause of the fresh spill incident is not yet known, but the first incident which occurred on August 2nd, 2022, was traced to equipment failure according to the Joint Investigation Visit, while a JIV has not been concluded on subsequent incidents.

Confirming the development, the Youths and Environmental Advocacy Centre, YEAC-Nigeria, regretted that the group’s Youths Volunteer Network has reported four spills incident from Shell’s TNP in less than three months.

Executive Director of YEAC-Nigeria, Mr. Fyneface Dumnamene Fyneface, lamented over the associated negative impacts of the spills on the environment, health and livelihoods of the people of Ogoni, who he said are predominantly farmers and whose sources of livelihoods have been destroyed by incessant oil spills.

Fyneface called on the federal government to carry out an independent investigation into the incessant spill incident from Shell’s TNP and urged NOSDRA to carry out a JIV to the spill site and ensure the spill point is clamped and the environment remediated.

“YEAC-Nigeria condemns the spill-rain as well as the latest oil spill in Bodo Community when issues associated with previous spills are yet to be addressed.

“Advocacy Centre reiterates its call for Shell and its joint venture partners to replace the obsolete Trans-Niger Delta pipeline in the Ogoni area which are overaged and now bursting and deflating like balloons and destroying the environment.

YEAC-Nigeria calls on the National Oil Spill Detection and Response Agency to immediately facilitate a Joint Investigation Visit to the new spill site, determine the cause of the spill, ensure that adequate compensation is paid to the affected community and its people if found to have been caused by equipment failure as suspected, clamp the spill point and clean-up the polluted water and area immediately.

“YEAC-Nigeria also called on the Federal Government and the joint venture partners to launch an independent investigation into the incessant oil spills in the Bodo community and the report used to stop further spills to avoid the extermination of the people over continuous poisoning of their environment and ecosystem.”

Meanwhile a JIV has not been concluded on two previous leak incidents from TNP in Bodo community, due to protracted disagreements among the community youths, Council of Chiefs and the operator.

SPDC, Media Relations Manager, Ms Bola Essien-Nelson, confirmed that Shell personnel who were on a JIV to the spill incident earlier this month were detained by members of Bodo community.

Essien-Nelson, however, assured that SPDC will continue to work with key stakeholders towards an amicable resolution of the situation in order to gain access to the incident site and conclude the Joint Investigation into the cause of the spill and repair the pipeline.

“On October 2, 2022, SPDC representatives along with regulators who went to conduct a Joint Investigation on a leak incident in Bodo were detained and refused exit from an ongoing leak repair site by some members of the Bodo community.

“Following further engagement with the community and with government support, all personnel were safely returned unharmed,” SPDC said.