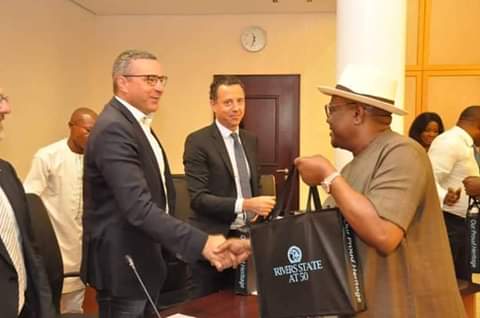 Port Harcourt — Rivers State Governor, Nyesom Ezenwo Wike, has reiterated that oil theft and illegal oil bunkering has continued to worsen in the country, because of the participation of security agencies.

Recall that in May 2019, Governor Wike had accused the General Officer Commanding, GOC of the Six Division of the Nigerian Army, Maj. Gen. Jamil Sarham, of running an illegal oil bunkering squad for the purpose of financing his quest to be appointed the next Chief of Army Staff.

To this end, the Rivers State Governor has called on the Federal Government to come out strongly to partner with the Niger Delta states in the fight against oil theft.

Governor Wike stated this while speaking during a courtesy visit by Members of German Parliament, Mr Andreas Lammel and Dr Joachim Pfeiffer, with officials of Konrad Adenauer German Foundation, at the Government House Port Harcourt.

He called for collaboration with the German Government and the German Foundation in the fight against insecurity in the state, as well as to attract German investments into Rivers State, in the area of agriculture to create employment.

“If the Federal Government comes strongly and partner with the states, you will find out that we will be able to solve some of the problems. Also, we have the problem of politicisation of security. It is unfortunate in this country.”

He said that the Rivers State Security Council took a decision in liaison with the oil multinationals to stop the patronage of cult groups for such jobs.

“This is because part of the problem is the oil majors continued patronage of cult groups,” the governor said.

Kreck said that the foundation invited two German MPs to Nigeria to acquaint themselves on the economic development programmes of the country.

Also speaking, a German MP, Andreas Lammel, said the main objective of the visit is to understand the economic development process in Nigeria, and discuss oil production and development in Rivers State.

While for Dr Joachim Pfeifer, another German MP, this is his first visit to Nigeria and he is interested in building cooperation between the two countries.