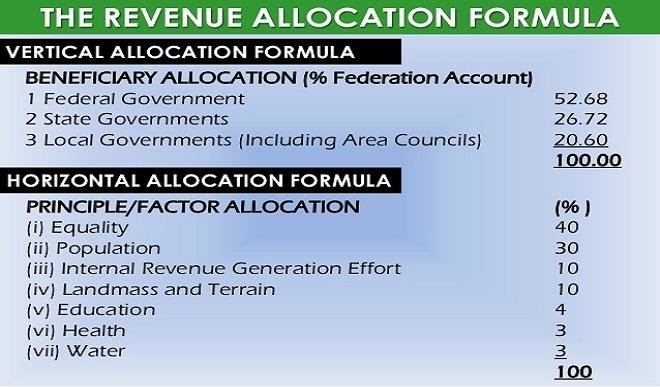 05 August 2018, Sweetcrude, Port Harcourt — Akwa Ibom State Governor, Mr. Udom Emmanuel, has raised the alarm over alleged deductions of the Federal Government’s monthly allocations to the state in the last two months, to the tune of N6.8billion.

Similarly, Bayelsa State government has accused the Nigerian National Petroleum Corporation, NNPC of funding fictitious subsidy as the reason why federal allocations have continued to drop.

Governor Emmanuel raised the alarm when a Presidential aspirant under the Peoples Democratic Party, PDP, Alhaji Kabiru Turaki (SAN), led a delegation of his campaign team to pay a courtesy visit on the governor, at Government House, Uyo.

The Governor, who expressed displeasure over the development, adding that the federal government has also withheld the derivation funds for the state, bringing financial constraints on the state government.

“As at today, they’ve withheld all our derivation funds, we have not gotten anything out of the derivation for last month. Within two months, they have dropped the allocation of Akwa Ibom State by N6.8bn, so you can imagine how much I was able to get, all in the name of politics. I’m still trying to pay salaries for July.

“That is what is going on now but I want to believe that if you come into power, you would never do that to the opposition. You need the opposition to govern well because if you don’t have constructive criticisms on what you are doing, you are heading towards destruction,” the governor stated.

For his part, the Presidential aspirant, Alhaji Kabiru Turaki, urged Nigerians to be careful in the calibre of people they elect into positions of authority to avoid individuals who have nothing to offer, to misgovern the country and destroy the economy.

The presidential hopeful, who is a former Minister of Special Duties, condemned the obvious neglect of the Niger Delta region by the federal government, saying that the injustice and failure of the government to honour agreements earlier entered with communities of oil-producing states in the region, have given rise to restiveness, which he claimed was justifiable.

Recounting the failed promises of the present administration, Turaki said the Nigerian constitution has been ‘hopelessly skewed’, promising that if given the ticket to contest and eventually emerged as the president, he would ensure amendment of the constitution for a proper restructuring of the nation as well as implementation of the 2014 National confab report.

Meanwhile, the Bayelsa State Government has maintained that the recent disagreement during the Federation Account Allocation Committee, FAAC, the meeting was due to the inability of the Nigerian National Petroleum Corporation to answer some basic questions concerning the disbursement of funds.

Speaking at the Government House in Yenagoa, the Deputy Governor of the state, Rear Admiral John Jonah (Rtd), said it was still a wonder how all the variables are looking favourable while the monthly allocation continues to drop.

Jonah said while the Department of Petroleum Resources insists that the total daily consumption of petroleum product is 36 million litres, the NNPC maintains that the figure is 60 million litres, but that the corporation continues to pay subsidy on non-existent figures.

“When this government came in with this issue of NNPC, we thought they could do something about it, but it seems to be difficult to get out of,” he said.

The government also decried the heavy differences between the figures released by the DPR and the NNPC on fuel consumption, stressing that even if Nigeria was supplying fuel to neighbouring countries, more than 10 million litres of the product would still remain unaccounted for every day.

“It is not so much about the shortfall that certain practices are not normal. Recall that the quantity of crude oil export is increasing, the price is increasing, while the naira has been devalued by a hundred percent.

“Even if the quantity is not increasing, the thinking of the governors’ forum is that as long as we have devalued, we should have more naira which will compensate for the loss of a quantity of crude oil exported. The oil output has increased because nobody is disturbing the pipelines now, so why will the money be reducing?

“Nobody has been able to give us a coherent answer. Why should the money be reduced when all the variables are favourable and increasing? Still no answer,” the Bayelsa state government said.