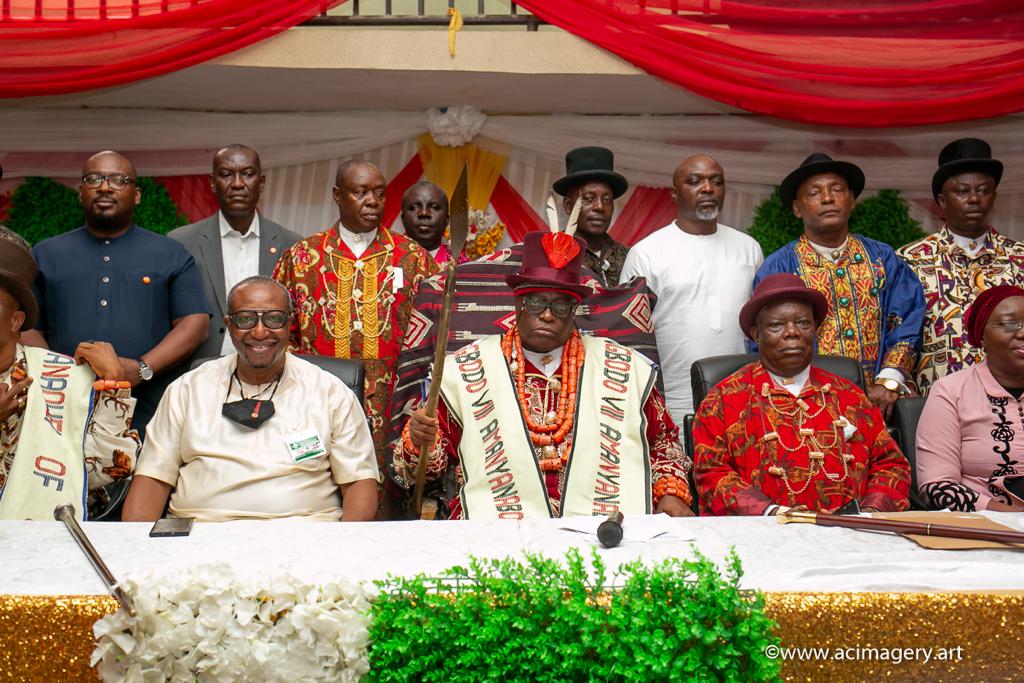 *Management of Aiteo with the Amayanabo of Opu-Nembe His Royal Majesty, Dr. Biobelemoye Josiah Ogbodo VIII, and his council of chiefs when they Aiteo team paid him a courtesy visit

Lagos — Aiteo Eastern Exploration and Production Company (AEEPCO), Operator of the NNPC/Aiteo Joint Venture of Oil Mining Lease (OML) 29 has contracted the services of the renowned, Boots & Coots, arguably the leading well control company in the world, working with a local resource to stem the ongoing leak of methane and crude oil.

A statement released by Aiteo disclosed that following this intervention it is expected that the persistence of the leak alongside its functional consequences will be abated and significantly diminished.

Aiteo disclosed that it is in active collaboration with Clean Nigeria Associates (CNA), adding that the group have since mobilized to site, “in addition to Aiteo internal resources to reinforce containment and recovery efforts”.

“CNA is the industry non-profit umbrella body with expertise and resource to contain spills of this nature. In the meantime, however, the area has been cordoned off and CNA is mobilizing additional resources to strengthen the containment effort. 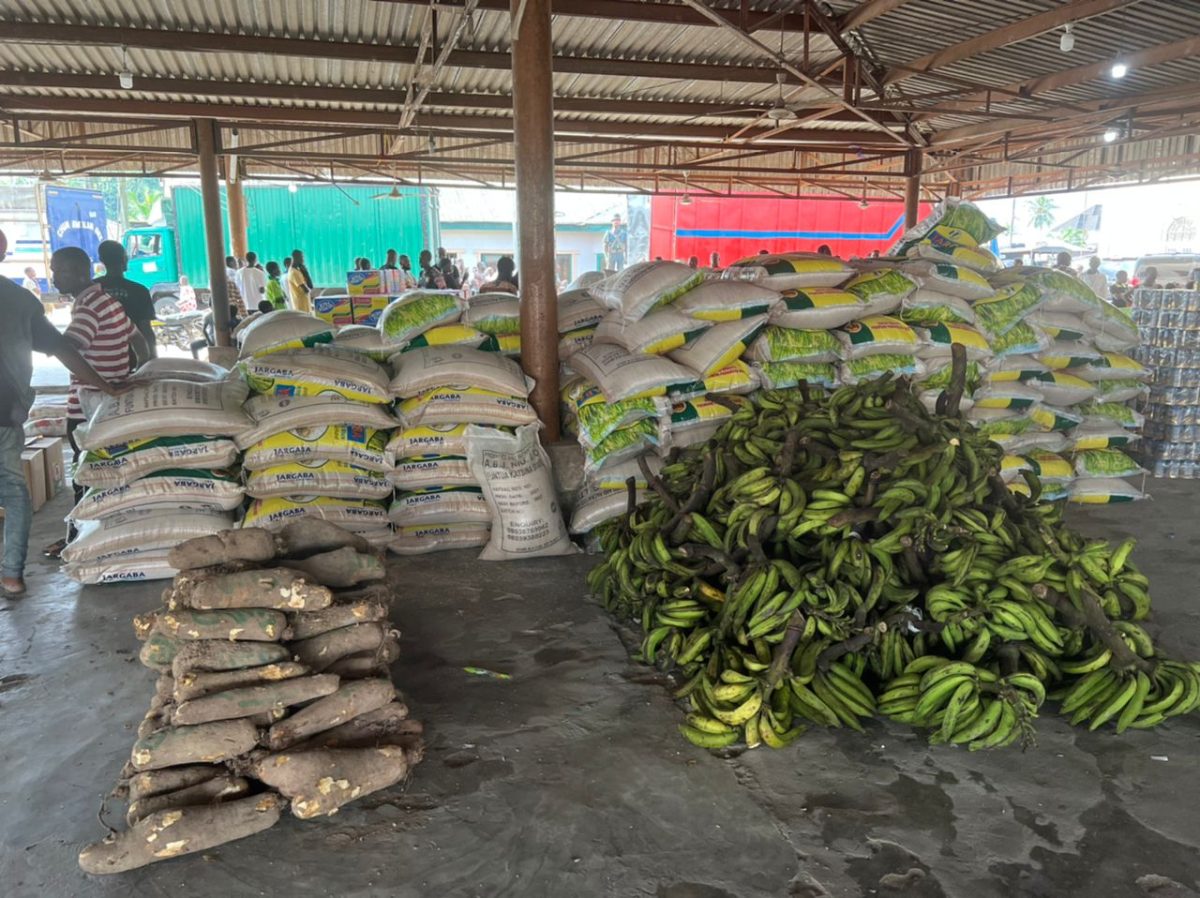 “Well killing assessment site visit has been carried out to evaluate the assets and earmark the resources required to bring the effusion under control. The required apparatus including heavy duty and specialist equipment are presently being mobilized, locally and internationally, on a fast-track basis, to bring the well under control.

The company disclosed that in addition to the efforts of the CAN, it has mobilized Boots & Coots to stem the leak.

“Senior personnel of the company have also visited the affected communities and made available, for the use of the communities, relief materials aimed at ameliorating the direct consequences of the incident. The communities visited include Opu-Nembe Kingdom, where the Aiteo delegation was received by the King His Royal Majesty, Dr. Biobelemoye Josiah Ogbodo VIII, his council of chiefs and all sections of the society.

“…we are happy that Aiteo has initiated this visit to support the community at this time and urge them to continue to work with us as partners in progress on its corporate goals in the community,” the King noted. 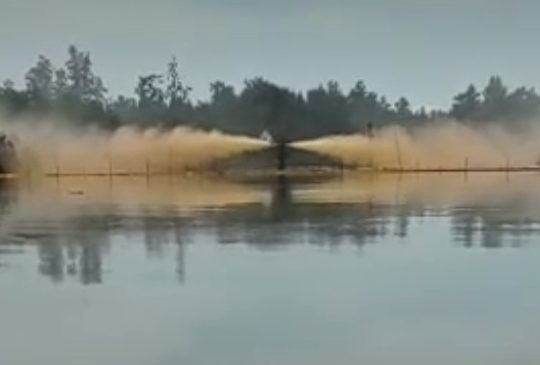 “We have mobilized best-in-class resources and expertise to put this mishap behind us. Be rest assured of our resolve to limit the escape of oil and protect the ecosystem from its effects,” Mr. Peters assured.

“This well, non-producing since Aiteo’s acquisition in 2015, was predominantly dormant, having been securely isolated since then. As hitherto stated, an accurate cause of the leak has not been ascertained as both priority and attention has been focused on containing the consequences of this most undesirable and unforeseen incident.

Aiteo disclosed that upon noticing the leak it notified all relevant regulatory agencies and thereafter mobilized containment resources to limit the impact on the environment.

“As required, Aiteo promptly called for a Joint Inspection Visit (JIV). Due to the high-pressure effusion, the JIV team could not reach the location and that inspection was aborted. Since then, Aiteo has activated an elaborate and extensive spillage containment response in the internationally prescribed manner. Though spills of this nature are not uncommon to the oil and gas industry, their resolution requires expert skill and equipment that are not routinely or readily available. The typical process is to first kill the well and stop the leak and then focus on the clean-up. Aside urgent possible technical responses to contain the leak,

“Aiteo remains committed to ascertaining, immediately the well head is secure, the immediate and remote causes of the leak which will be driven by a JIV that will follow. Nevertheless, it is important that we affirm our preliminary view, based on our assessment of the proximate circumstances, that it will be difficult to exclude deliberate tampering of the well by oil thieves attempting to siphon crude directly from the well head. In our view, sabotage remains the most imminent cause of this incident.

“Oil theft and asset vandalism continues to present the biggest challenge we face in the operations of oil and gas production in the Niger Delta area. It has continued to damage the production profile of oil producers in so many ways. As we commend the relevant security agencies with whom we interface to combat this menace, we believe the need and capacity to provide significantly more remain overwhelmingly critical especially because there is so much more to be done to realign the architecture of the delivery infrastructure of oil and gas production in Nigeria in line with the current industry structure of multiple producers operating assets that were previously built and managed by one producer.

“Aiteo feels deeply concerned on the occurrence of the incident at all. The circumstances and fortunes of the immediate community remains our most anxious consideration and, at this time, has assumed the highest priority, alongside making safe the well and its immediate environs. It is our fervent desire that in the attainment of this intensely challenging objective, the interests of the proximate community continue to be safeguarded in every material respect by the collective efforts of our company and all the industry professionals whose involvement Aiteo has convoked,” the company disclosed.