on: November 14, 2018In: Community Development, featured 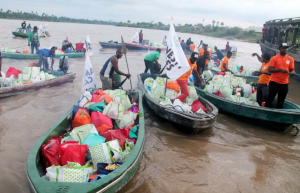 14 November 2018, Sweetcrude, Port Harcourt — Some communities ravaged by flood recently in the Niger Delta region can now heave a sigh of relief, as the Presidential Amnesty Programme has commenced distribution of foodstuff and other household items worth N90 million to the affected communities to ameliorate their plight.

The exercise which is tagged ‘Amnesty Cares’ commenced on Saturday and is scheduled to last till the end of this week. It is focused on communities mostly affected by the flood in Bayelsa, Rivers, Delta, Ondo, Edo states.

Special Adviser to the President on Niger Delta and Coordinator, Amnesty Programme, Prof. Charles Dokubo,  while flagging off distribution of the relief materials, said the gesture is to provide succour for inhabitants of the affected communities who had lived in terrible conditions since their homes and sources of livelihood were consumed by the flood.

He said: “The Amnesty Programme is meant for the people of Niger Delta and whatever affects communities in the region affects us directly or indirectly. President Muhammadu Buhari was moved by reports on your plight and we are here to identify with you in your period of need; we are here to alleviate your pains.

At Trofani, Bayelsa State, the King of Kabowei kingdom, HRH Aserifa Torru, while receiving officials of the Amnesty Office in his palace, before the commencement of distribution of relief materials in the community, described Prof. Dokubo as a humane, responsive and caring leader committed to the interest and welfare of Niger Delta people.

“It is on record that we have had several flood disasters in the past; I remember what happened in 2012 and thereafter. This is the first time the Amnesty Office will share in our pains and take steps to ameliorate our plight. This is commendable and I urge other private and public organizations to take a cue from what the Amnesty Office has done to give us succour,” added.

“We are happy that President Buhari appointed a man like Prof. Dokubo as Coordinator of the Amnesty Programme. He is a God-sent leader who has recorded laudable achievements within six months in office; what he has done today is first of its kind since the inception of the Amnesty Programme, and it is highly appreciated,” Opukeme said.