on: November 18, 2012In: Community Development, featured 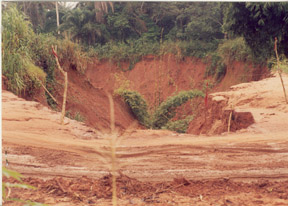 18 November 2012, Sweetcrude, AWKA – ORIENT Petroleum Resources Limited is faced with a fresh distraction at the moment – this time not in respect of ownership of its oil wells, but ownership of the piece of land where its proposed refinery is located.

The claims and counter claims are between Nsugbe and Umueri communities, both in Anambra East Local Government Area of Anambra state.

Already, there is on-going controversy over ownership of the oil wells among Enugu, Anambra and Kogi states, and this is yet to be settled.

On the day Orient Refinery was commissioned by President Goodluck Jonathan, the Chief Executive Officer of the Company had hinted in a brief chat, that the land belonged to Nsugbe people and that compensation and other necessary ground works had been completed.

But less than one week later, the people of Umueri stormed Abuja, protesting the position of the Orient Petroleum boss and claiming that the land was theirs.

They claimed that a case instituted in the Court over the ownership of that land was still pending and wondered why the oil firm was faster than the court in drawing conclusion on that matter.

Nsugbe people have, however, countered the action of the Umueri people.

A document prepared by one Mr. Ernest Nwoye, the Counsel to the Umueri peole read, “Our clients, the entire peace-loving people of Offianta, Nsugbe, in Anambra East, read with dismay, the story which was published in ‘The Sun’ of September 19, 2012. Our first reaction was to keep mute and ignore the mis-representation. But after wider consultations, our clients mandated us to keep the records straight”.

He continued, “The proposed Orient Refinery to be built by Orient Petroleum Resources (OPR Plc) is located on an area of land called and known as Achutu.

Achutu land is the ancestral home of the people of Offianta, Nsugbe in Anambra East L.G.A of Anambra State. Offianta Nsugbe therefore, are bonafide owners of Achutu land, the site of the proposed Orient Refinery.

“We wish to state that the CEO of Orient was correct that the Refinery is located in Nsugbe. We can only urge him to be more specific next time, so as to avoid further confusion.

“In 1989, Offianta Nsugbe sued Nnenyi Umueri for trespass into the land and for damages, in suit no. OT/25/1989. They claimed ownership of the land and filed a motion challenging the suit.

The apex Court also ordered for accelerated hearing of the substantive suit of trespass at Otuocha”.⁮