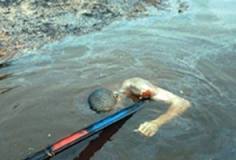 25 January 2013, Sweetcrude, Lagos – No fewer than four suspected vandals have been arrested by the Inspector General of Police Special Task Force on Anti Pipeline Vandalism, following Wednesday’s explosion on the System 2 B pipeline in Arepo, Ogun State.

One of the vandals on the run was said to be part of those who allegedly killed staff of Nigerian National Petroleum Corporation, last year at Arepo.

The suspects identified as Wale Onan, Owekeware Olusor Ekperemor, Ebimiru Yeyha and Truce Iroju, were reportedly arrested, yesterday, around Konu and Majidun areas of Ogun State. It was gathered that the vandals intentionally set fire on the ruptured pipeline.

Assistant Commissioner of Police in-charge of the Task Force, Friday Ibadin, who confirmed the arrest, explained that policemen led by the Lagos State Sector Commander, Onaghise Osayande, a Deputy Superintendent of Police, DSP, cordoned off the area immediately they received a distress call at about 4.30am.

He said they extended their search to Majidun where they spotted some of the vandals in a hideout.
While four of them were arrested, others, managed to escape through the creeks.

During interrogation, the suspects reportedly claimed to have set the pipelines ablaze to prevent the ongoing construction of the NNPC-induced platform which would enable the police to have thorough surveillance of the area.

In his confessional statement, one of the suspects, Wale Onan, said: “We learnt that NNPC was mounting a platform close to the creeks and that will be bad business for us.

So it was agreed that we should try and stop them, pending when we must have got enough supply that we can manage before another spot is discovered.

Discovery of another spot“On Wednesday, we sneaked in through the river at about 12 midnight and siphoned the product into few gallons.

While we were leaving, Yukun lit a cigarette and threw it at the ruptured part and the fire started again. Igbekorowa, asked us to move ahead of him while himself and Yukun followed behind. But we did not know that policemen were hiding in the bush.”

Wale added in his confessional statement that Igbekorowa who managed to escape, was among the vandals that killed three staff of NNPC last year, adding also that another member of his gang who was seriously burnt during January 13, 2013, explosion while siphoning petroleum product at Arepo, was receiving treatment in Ondo State.

Another suspect Owekeware claimed that he never knew that they were going to the spot to cause another fire incident.

He said: “Shortly after that fire outbreak, it was agreed that we should stay away from that spot and look for another area. I was surprised when Igbekorowa called and asked me to meet him at the waterside.

He convinced me to join them, when we were about leaving; Yukun threw a cigarette back to the spot after we were safe from the fire. I was shocked and they explained that NNPC wants to mount a permanent security post in that area.

They said that once the fire is on, those engineers cannot erect any structure because of the heat. I never knew that this was their plan that was why we were allowed to fall into police trap while they escaped.”

The commandant who took a walk round the community discovered some buildings with pipes laid to the stream where the NNPC pipelines are laid.

Abolurin said that vandals use most of the structures as cover; to siphon petroleum products from the NNPC pipelines, adding that some house owners in the community have contravened the law by erecting structures close to the pipeline; not minding warnings from government that the place is a danger zone.

He noted: “Structures are not supposed to be erected around here; but as you can see, they even build their houses very close to the pipeline zones. Some of the houses are not yet occupied but there are indications that the vandals come during the night to carry out their nefarious activities, using the buildings as cover.

As you can see, the NNPC erected a sign board long time ago warning people of the dangers associated with erecting structures close to NNPC pipelines. But, the sign board had been pulled down and relocated; while residents have encroached the pipeline areas.”

“This place is a riverine area, and the vandals have improved on their mode of operation. They have their local equipment and expertise.

They make use of kegs, drums and polyethene bags to give the impression that they are fishermen; however, we have made substantial arrests and some of them will soon be prosecuted.

The corps would have to restrategise in the area of surveillance and acquire new devices to ensure the job is done.”

Abolurin who said about 15 vandals had been arrested in the past one week in respect of Arepo explosion, called for collaboration with governors, relevant security operatives and the community to always give vital information about the activities of the vandals.

He said: “Most of the vandals have been sent packing from the Niger Delta area; unfortunately they want to relocate to Ogun and Lagos States. May I use this medium to inform them that Nigeria is not a place anybody can shake anyhow? So, it is either they cooperate or flee from the country.”