on: November 28, 2018In: Community Development, featured 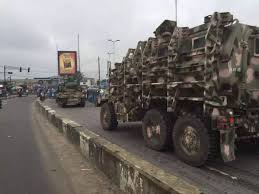 28 November 2018, Sweetcrude, Warri, Delta State — Operation Crocodile Smile III launched by the Nigerian Army for the Niger Delta on October 22 ended on November 22 with a commendable move by the army to enhance civil and military relationship in the region.

About 9000 exercise books were donated to various primary schools in Warri, Sapele, Udu and Ughelli parts of Delta state. Colonel Alhassan Grema, Commander Sector I, Operation Delta Safe who presented the notebooks at most of the primary schools visited said the army chose to donate books and also embark on cleanup exercise of communities because last year attempt to immunize pupils was greeted with rumour that the army was to inject children with monkeypox, an allegation that sent panic around the region with many parents rushing to withdraw their children from school.

The army also embarked on clean up of markets in Effurun, Ughelli and other areas in Sapele and Otujeremi.

Residents in these areas told newsmen that they were happy soldiers were relating with civilians. “In the past when we saw soldiers come out in this number we ran because they were coming for war. But this time we see them clean our community. This has never happened. It will get the people closer to the army”, Madam Edijala said at Effurun market.