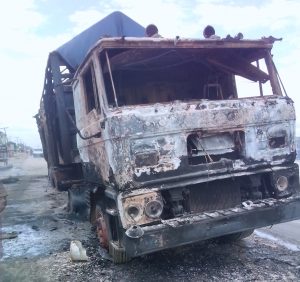 *One of the vehicles set ablaze by the irate youths.

15 September 2018, Sweetcrude, Port Harcourt — Suspected members of the Indigenous People of Biafra have burnt 15 trucks conveying goods worth billions of Naira from the Onne Seaport to other parts of the country, in a bid to enforce compliance of the sit-at-home directive allegedly ordered by the group.

It was gathered that the angry youths took to the streets as early as 3:00 am to enforce the order burning 15 trucks laden with goods such as flours, fertilizers, pasta, and beans, on the Oyigbo axis of the Port Harcourt-Aba Expressway, causing pandemonium.

The situation which was later brought under control by men of the Nigerian Police Force left commuters stranded as the vehicular movement became difficult on the already dilapidated highway. 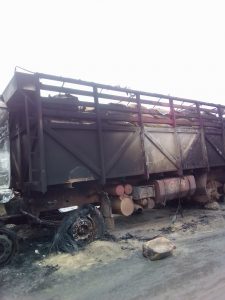 *Another vehicle set ablaze by the irate youths.

Lawal said other trucks conveying goods such as rice beans, fertilizers, and flours were also set ablaze by the bandits while money amounting to about N1.2million placed in some of the trucks were stolen by the bandits.

“We were informed that it was IPOB members that set our trucks ablaze. Some of the trucks set ablaze were conveying goods outside Port Harcourt, others were parked along Port Harcourt/Aba express road by Oyigbo Timber junction while some other ones are coming into Port Harcourt through Oyigbo.

“The trucks were loaded with 30 tons of beans, 30 tons of fertilizers, 30 tons of rice and were on their way to their various destinations before they were attacked.

“This incident occurred at about 3.00am Friday morning. About 4 drivers who were in the trucks were abducted and they are still missing as we talk now. An unconfirmed amount of money in various trucks was also stolen by this bandits.” 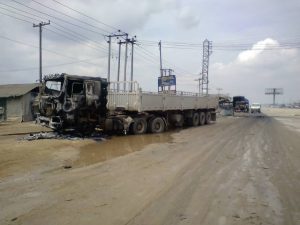 *Side view of one of the vehicles set ablaze by the irate youths.

Also, Chairman, Oyigbo Local Government Area, Mr. Gerald Oforji who was on the scene of the incident to access the level of damage, said that he was informed that some bandits were attacking residents of the area and threatening them not to open their shops and business centers.

Oforji who said that police and other law enforcement agents quickly moved in to save the situation, added that trucks conveying goods as well as compactor machines were set ablaze by the arsonists.

The Council boss who condemned the incident in strong terms, however, blamed the incident on the deplorable state of the local government section of the federal road.

“We have since morning gone round the flashpoints, where the incident took place, informing the people not to panic. If you go to the town, you will see that normal business has resumed.

“The deplorable condition of this federal road (Aba-Port Harcourt expressway) from Imo River down to Eleme Junction contributed to the incident.

“The reason these people succeeded in doing this is that of the bad condition of the road if the road was good, this vehicles would have swiftly moved out of this place. Now, this trucks loaded with goods worth millions of Naira have been destroyed.”