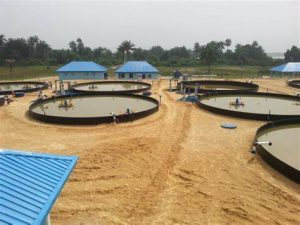 Port Harcourt  — Fish farm project is now being set up for artisanal crude oil refiners in Gokana Local Government Area of Rivers State, as alternative means of livelihood, to dissuade them from returning to illegal refining, which contributes to environmental pollution.
The project is coming a year after Advocacy Centre organised training for artisanal refiners in Rivers State, where fish farming, modular refineries, cinematology, renewable energy, bio-toilet system technology and rice farming were proposed as alternative means of livelihood.
Speaking at the flag off of the project in Mogho community, Gokana LGA, the Coordinator, Centre for Environment, Human Rights and Development, CEHRD, Prof. Nenibarini Zabbey, said 20 ex-artisanal refiners and non-refiners alike, are billed to be trained and empowered on fish farming.
Zabbey explained that the project is aimed at empowering youths, especially those involved in artisanal refining, which contributes to environmental pollution.
The beneficiaries who are selected from six communities, including B-Dere, K-Dere, Gbe, Bomu, Bodo and Mogho, have at least eight women amongst them.
“The participants would participate and learn while the construction of the fish ponds are ongoing and then be trained on fish farming methodologies and also have the farm stocked for them.

“They would then train the fish to maturity, sell, raise fund to maintain the facility and then train others in the skills.
“The beneficiaries also stand the chances of being empowered with starter packs by CEHRD and its partners at the end of their skills acquisition and certification. The fish farm training program is expected to last for six months,” Zabbey said
Also speaking, Executive Director of Advocacy Centre, Fyneface Dumnamene Fyneface, said he was engaged by CEHRD as Research Consultant in July 2020, for a study to ascertain the livelihood needs and priority skills needed by artisanal refiners in the Niger Delta, as alternative to artisanal refineries.
Fyneface explained how the beneficiaries were selected, based on needs assessment study earlier carried out for CEHRD on the project, and contacts made through the modular refinery movement for artisanal refiners.
“Since then, Advocacy Centre has been partnering with CEHRD for the provision of alternative means of livelihoods for artisanal refiners, and was given the opportunity to nominate 15 out of the 20 beneficiaries of the fish farm project from specified communities in Gokana LGA, Rivers State.”
The Project Consultant and Trainer, Felix Baridole, said catfish would be reared and sold to waiting markets, including those demanding for fingerlings from neigbouring countries, including Cameroon.