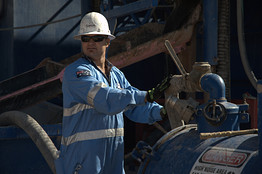 11 February 2013, News wire – SYDNEY – Workers in Australia’s oil and gas sector are the highest paid in the world and earn 25% more than U.S. counterparts, according to a new survey that lays bare the pressures facing companies like Chevron Corp. as they invest billions of dollars to meet Asia’s booming energy demand.

Australian workers pocket an average of $163,600 a year to work on projects that range from platforms drilling for natural gas in deep water off the northern coast to onshore rigs seeking to unlock deposits of unconventional gas in the sweltering heat of the Australian Outback, the survey by recruitment firm Hays found.

The labor market has tightened as more than $160 billion is invested in Australia’s natural gas industry, which has to compete with big mining projects for pipe layers, welders and engineers. As a result, Hays said the bulging pay-packets offered Down Under are even higher for imported workers–coming in at $171,00 a year.

A combination of vast natural gas reserves, a stable political environment and proximity to fast-growing Asian economies have put Australia on course to overtake Qatar as the world’s biggest exporter of liquefied natural gas, or LNG, by the end of the decade. Around 12 multi-billion LNG projects are either under construction on its coastline or on the drawing board.

With a population of around 23 million people–less than ten times smaller than the U.S.– Australia lacks a deep labor pool for major projects and large salaries are often required to entice workers to remote corners of the country.

Spiralling labor costs have already contributed to a series of budget overruns at Australian gas-export projects operated by Chevron, BG Group PLC and Australia’s Santos Ltd. In the largest example, Chevron said higher labor costs were partly to blame for a 21% increase in the cost of building the Gorgon liquefied natural gas development to 52 billion Australian dollars ($53.5 billion).

But in a mild positive for developers, the average Australian salary in the oil and gas sector fell 0.7% in 2012 compared to 2011.

Norway is the second most expensive country to hire local workers, with an average annual salary of $152,600 needed for recruitment, Hays said. New Zealand ranks third with a median pay packet of $127,600.

“The guide does reveal signs of a slowdown in salary growth for both imported and local labour in Australia, which may be a sign that the market has passed its peak in terms of demand for specialist oil and gas skills,” said Matt Underhill, managing director of Hays Oil & Gas.
*Ross Kelly