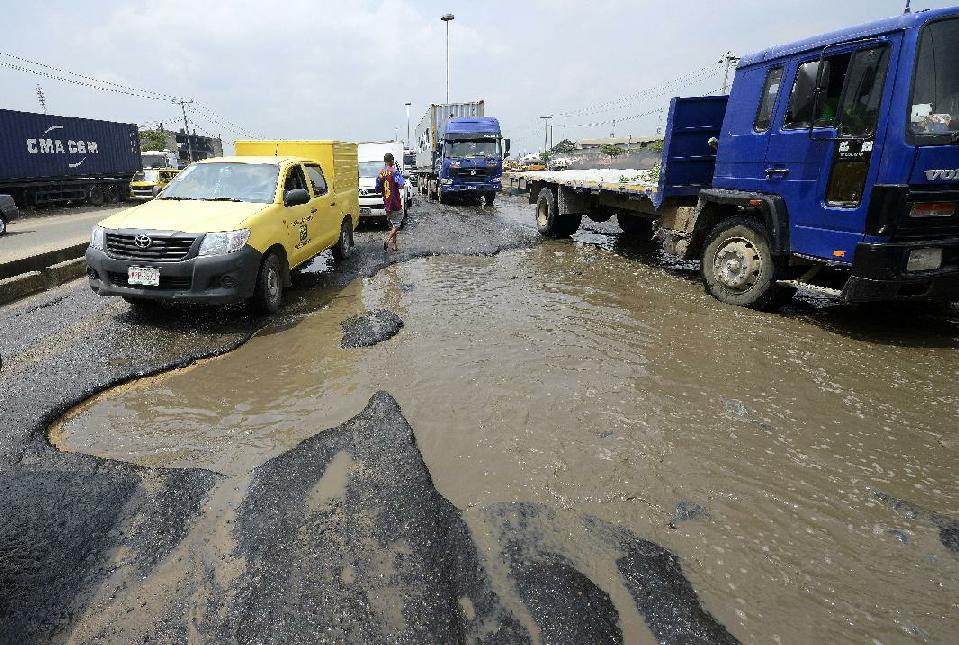 *Motorists stuck in traffic on waterlogged potholes on the Apapa Oshodi expressway in Lagos.

18 December 2018, Sweetcrude, Lagos — The Chairman, Seaport Terminal Operators Association of Nigeria (STOAN), Princess Vicky Haastrup, has lamented how bad roads and the menacing Apapa gridlock, which she described as a monumental national disgrace, is frustrating operations at the nation’s seaports.

Haastrup, who spoke to newsmen in her office, said terminal operators are working under the harshest business environment, in spite of the huge investments they have made towards developing the ports.

The STOAN Chairman wondered why successive governments in the country allowed the port access roads to progressively degenerate until they became impassable.

She said, “The situation in Apapa particularly as it relates to access to the port is a monumental national disgrace. How can a sector that has such huge potential and that generates billions of naira for government be left to so degenerate? Government is looking for oil but we have a sector that has the capacity to give you all the revenue you need yet the sector is suffering. Why has it not been attended to?”

The STOAN Chairman said the large number of tank farms located within Apapa has also compounded the chaotic gridlock, while more licenses are still being issued to new tank farm owners.

She also asked the Federal Ministry of Works, Power, and Housing to urgently reopen the bridge exiting Apapa at Leventis/Area B, which has been shut down for several months without any visible sign of work being carried out on it.

“Without reopening that bridge, the inflow and outflow of trucks will remain a major challenge in Apapa,” she said.

Also speaking, the Africa Communication Manager of Maersk, Augustine Fischer, said the poor condition of roads in and out of the Apapa area of Lagos State remains a major blight on port operations in Nigeria.

He argues that the two seaports in Lagos handle more than sixty percent of goods imported into the country. While the volume of cargoes imported into the country has been on the rise —increasing from about 35 million metric tonnes in 2006 to more than 80 million metric tonnes 12 years later —the roads through which these goods are taken out of the port to their final destinations have gone from bad to worse.

“The poor road condition coupled with a lack of parking lot for trucks and proliferation of tank farms in Apapa, means these trucks have to spend days – sometimes as much as 10 days – to cover a short distance of less than 5km to enter the port to drop off, or take delivery of cargo.

“The resultant effect is a backlog of cargoes at the port. Cargoes that should ordinarily exit the port within three days after discharge from the ship could remain in the port for as long as 21 days, waiting for trucks.

“The best solution to the Apapa traffic congestion is to fix the roads and seek alternatives to cargo evacuation. The port has increased in efficiency and capacity but the port access roads have deteriorated progressively since they were built,” Fischer said.

He said while the Federal Government is working to address the road condition especially as it affects the Wharf Road, which is the major road leading into the Apapa Port, and has also flagged off repair of the Apapa-Oshodi Expressway, there is need for some immediate short-term measures to address the plight of commuters and ensure free flow of traffic on the roads.

The short-term measures that government can take to address the gridlock, he said, include fixing alternative roads, such as the Leventis road, “which many now rely on to exit the port city”.
Also speaking on the gridlock, the General Manager of PTML Terminal, Tin Can Island Port Complex, Tunde Keshinro, said, “As Nigerians, we all know that for our ports to attain the desired efficiency, the roads need to be at that great and functional level, which unfortunately is not so.”

STOAN recently said the Nigerian economy depends largely on the seaports with a large chunk of import and export volumes being handled daily through the Apapa port.
The association said many functional businesses around the ports have either shut down or are operating well below capacity due to persistent gridlock on the port road, thus turning the once booming port city into a ghost of its former self. “Many jobs and wealth creation opportunities have been lost while the economy loses more than N20 billion daily as a result of this avoidable situation,” the association had said