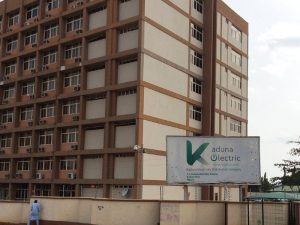 Kaduna — The Abakwa community in Kaduna North Local Government of Kaduna State has commended Kaduna Electric for what the community described as the company’s “act of exemplary leadership and readiness to quickly respond to the community’s needs”.
The commendation was contained in an appreciation letter dated 9th August, 2021 and sent to the Company by the umbrella association of the Community, the Abakwa Youth Association, AYA.
The chairman of the AYA, Engr. Muhammad Sagir Hussaini, described the timely response of Kaduna Electric in relocating some high tension poles around the Community Primary School and the magnanimity of the Company in providing the community with needed electrical materials ,which paved way for the construction of two storey building of 12 classrooms in the Abakwa primary school.
“Your efforts and contribution in making sure that the said poles were removed in addition to providing us with some of the needed electrical equipments for this work will forever remained in our hearts. Indeed, we are very grateful by this act of exemplary leadership and the readiness and quickly respond to community’s needs”, the appreciation letter stated.
The Chief Technical Officer of Kaduna Electric, Engr. Bello Musa said the exercise was the Company’s modest way of contributing to the development of the society.
He assured the general public of the Company’s readiness to make all necessary investment to ensure uninterrupted electricity services in its franchise.
Engr. Bello Musa appealed to all electricity users in Kaduna, Kebbi, Sokoto and Zamfara States to always reciprocate the efforts of the Company by living up to their obligations.