Evergreen
Home featured Barkindo gets award for advancement of OPEC

Barkindo gets award for advancement of OPEC 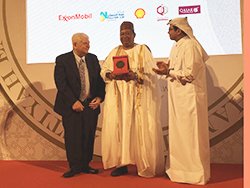 12 May 2018, Sweetcrude, Lagos – OPEC Secretary General, Mohammed Sanusi Barkindo, has been presented with the Abdullah Bin Hamad Al Attiyah Energy Award for Lifetime Achievement for the Advancement of OPEC, at a ceremony in Doha, Qatar.

The award was a recognition of the pivotal role the Secretary-General played in the adoption of the ‘Declaration of Cooperation,’ which has had a transformative impact on the global oil industry.

The cut agreement which has been extended twice now has achieved a 149 percent success since commencement in January 2017.

The Abdullah Bin Hamad Al-Attiyah International Energy Award celebrate the legacy of Al-Attiyah by recognising the work of individuals who have, over the course of a professional lifetime, made an indelibly positive contribution to the betterment of the global oil industry.

Speaking, Barkindo paid tribute to Al-Attiyah, describing him as “an icon, a living legend, an industry veteran, with sharp wits, a wonderful sense of humor and deep humility.”

Barkindo was introduced by Dr. Mohammed Bin Saleh Al-Sada, Minister of Energy and Industry, Qatar, who paid tribute to the Secretary General’s inspiring leadership, statesmanship and unwavering dedication to furthering the objectives of OPEC.

The Secretary-General then thanked the wider OPEC family, saying “I am receiving this prestigious award on behalf of OPEC who together with our non-OPEC

OPEC partners have joined hands to assist the oil industry restore stability to the markets through the historic “Declaration of Cooperation,” after the longest and most destructive oil cycle in history.”