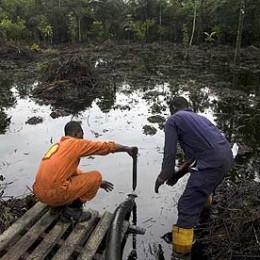 The latest spill which brings to twelve the number of recorded cases of oil spillage along the Rumuekpe-Okordia pipeline it was learnt occured at about 10.25 am Saturday prompting the oil giant to despatch its perrsonnel to the area to contain the spewing crude.

According to Mr. Geoffery Beli, “the crude oil was gushing seriously few hours ago. And, it is the very first time such is happening at this very spot. It happened at about 10: 25 A.M today, (yesterday) 12th November, 2011. We suddenly saw the gushing of spill here and as you must have see while going round, the spill has spread over 300 metres into the environment and has not only flooded our farms, it has impacted ponds, the swamp and economic trees.”

“This, as you know will affect both the fauna and flora without any doubts. The damage will be huge. For now, the area impacted belongs to the Izewari family of Ikarama community, of which I am a member. Even my own pond is affected. We are lucky that this incident happened in broad day light; otherwise the pressure with which it was gusing initially would have continued for many, many hours and the crude oil would have spread even into the Taylor Creek.”

“ But because we informed Shell in time the company has lowered the pressure on the Adibawa delivery line. That is why you can see that it is only oozing now slowly now. On the spur of the moment the Izewari family wants Shell [SPDC] to promptly respond to this spill incident by making sure a properly constituted Joint Investigation Team [JIT] visits the site and impacted environment and report accordingly. We sure will need relief materials from SPDC, even as we demand for proper clean-up and remediation of the impacted environment and adequate compensation to the family. The Government and Environmental NGOs like ERA/FoEN should assist us to see that Shell does the proper thing on this matter.”

The head of the fdield Monitors of Environmental Right Action (ERA) in Bayelsa, Comrade Alagoa Morris, said “This is the 12th oil spill that has occurred between August and November, 2011 in Ikarama community environment. One of the very first things ERA’s field monitors observed was the way owners of the impacted land, crops, ponds, swamp and economic trees were interested in the real cause of this spill. “

“By the statements they left no doubt about the cause of spill even before ERA was led to the actual spill site along the Adibawa-Okordia delivery line; about a hundred and fifty metres from living homes. Even before the constitution and visit of any JIV team to ascertain the cause of spill, anybody who visits this spill site can attest to the fact that this is a case of equipment failure.”

“ From experience gained in the field, this is one of the most obvious cases that points to that fact: no signs of any clearing around the spill site, no signs of any digging, just some soft mud that was forced out from the ground with the crude oil and a spongy-like feeling on the immediate spill spot. And, the fact that the crude oil was gushing from three spots within the same spill site supports this point of reasoning because the top soil was still intact.”

“ERA saw cassava farms, including newly germinating one flooded with crude oil that was still yellowish in colour. And in some spots in the farm, the thickness of the crude oil was up to 7 inches in depth. Apart from farms so impacted, the swamp, ponds and an area of about 30 plots of land was seriously impacted by the crude oil. As ERA was led around, the yellowish colour of the crude oil was observed under the grasses, plants and other vegetations around.”

Confirming the spill, SPDC Spokesman, Mr. Precious Okolobo said, “SPDC contained a spill on Adibawa delivery line which was reported yesterday (Nov 12). We had despatched our spill containment team to the site as soon as we receive the reports, and the personnel succeeded in containing the leak.

“A joint investigation visit is planned within the week to find out the cause and impact of the spill. The delivery line is part of the Okordia-Rumuekpe line, which SPDC shut down following a leak on Nov 8, and subsequent fire incident. A joint visit found that the spill caused by hacksaw cuts.

“There have also been several hacksaw cuts on Adibawa delivery line this year.”